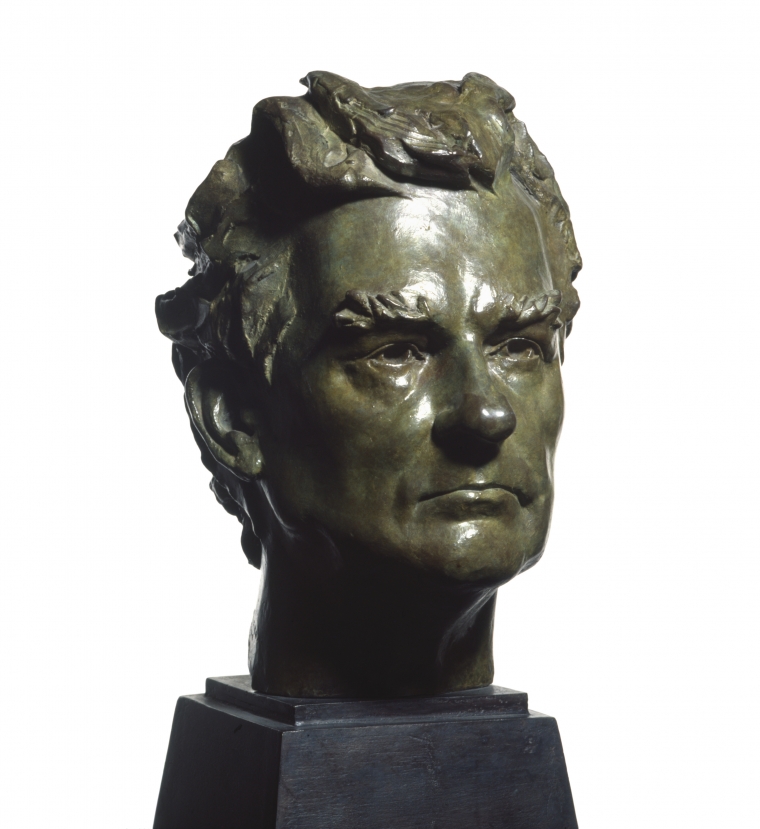 Dear Paul
I had everything laid out for you on Sunday, so it was a pity that the flight time change meant that we could not meet then. Practical demonstration, as they used to tell us in the Army, is the best method of instruction! However, I hope that the following notes will be clear enough and are what you require:

MODUS OPERANDI
At your house I modelled your head at lifesize in clay over a prepared armature or support, using wooden toools and calipers.
I then retired to your garage where I made a 2-part plaster of Paris waste mould of the clay image. With this type of mould the clay model is destroyed when the mould is opened.
I then took the mould home to Scotland, where/I cast into it a reinforced plaster positive image; the waste mould was then chipped away (and destroyed in the process.) This left me with a plaster cast identical to the original clay model, which is easily handled and can be stored indefinitely.

The next stage is to make a flexible rubber mould of the plaster cast which can be removed from the plaster (and, later, from the wax) without damaging either the cast or the mould. This is done by selecting a convenient line of division for the mould, applying a rubber layer on both halves, and supporting them with reinforced plaster jackets, thus:-

The plaster model is then removed from the mould and put on one side. Wax is melted and by brushing and slip casting a layer of wax is built up on the inside of the rubber mould to the desired thickness of the bronze - ideally, about 3/8”. (Throughout this part of the process various separators or parting agents are used to prevent things sticking to one another, such as the wax to the inside of the mould or the rubber to the plaster, etc.)
The wax is then removed from the rubber mould. It is hollow,and the same thickness and shape that the bronze will be when it is completed.

Four feeds, consisting of wax rods about a finger’s thickness are applied to the bottom edge of the wax, and joined together at wax cup. Risers, made of 1/4â diameter wax rods, are fixed at the highest points between the feeds:

The entire assembly is now ‘invested’ (cf. etymology of siege) either with a solid mass investment or, as in your case, by ceramic shell formed by dipping the wax in a slurry and then coating with ceramic powder and allowing to dry. Ten coats are required in this case, in order that the ceramic coating will be about 1/4â thick all over the wax, inside and out:-

The assembly is then placed, with the cup downwards, in a kiln, and heated as rapidly as possible to about 750 centigrade and held at that temperature for 20 minutes. The wax melts,runs out of the mould, and burns; the mould is left empty, dry sterile, and hot, with a void in it which is exactly the shape of the bronze to be cast into it.
Meanwhile, in the furnace a crucible of bronze ingots is heated to a temperature of 1200 C. When the molten metal is ready the mould is rushed, hot, from the kiln to a pit in front of the furnace and supported,with the cup uppermost,in sand.
The crucible is lifted from the furnace with tongs, the dross cleared from the surface of the molten metal, and the mould filled with bronze poured in through the cup. If all goes well the bronze will fill exactly the void left by the departed wax, running from the cup through the feeds and into the head shape, finally coming back up through the risers and expelling all the air before it.
When the mould has cooled the ceramic shell or other investment is broken away from the bronze, the metal cleaned, and the feeds and risers are cut off. Any imperfections in the cast are chased away. Holes are drilled and tapped for the bolts which will secure the sculpture to its base.
Patination, or the colouring of the bronze, is a difficult and rather unpredictable art. It is not simply a matter of painting on a colour, but is acheived with corrosive chemicals and heat. When the colour is considered satisfactory, the surface of the sculpture is waxed to stabilise the patina. In your portrait your own colouring is obviously a major characteristic and the patina I utilised in your case is intended as a metaphor for it.
These things, which are known by all the practitioners of the art, were taught to me by the late George Mancini, who came from a family of Roman bronze casters who were brought to London before WWI by Lord Kitchener to cast garden statuary, and who later set up Fulham Art Bronze Co., which still exists. George’s father’s last commission before leaving Rome was to cast a giant equestrian statue of Garibaldi he, the sculptor and the architect of the base all had lunch in the belly of the horse before it was closed up.
George grew up in the London foundry, and by the age of 12 he knew every variation of the slope on the Fulham road in detail because he ‘had frequently to push a wooden costermonger’s barrow,laden with 5 cwt of coal,from the gasworks to the foundry to fir?up the furnace.
All of the processes used were ancient ones, and George continued to use them in his own career. There were no power tools. His autocratic father was a fencer, and bow drills were made for the foundry out of broken and discarded fencing foils’. Such is the ingenuity of the Italian artisan.
Welding was unheard of. Arms and legs were attached with sleeve joints, perfectly fitting, and rivets.
I was very fortunate to meet George Mancini at the end of his working life; before then he had resolutely refuse to allow anyone into his foundry while he was working, and he was quite reclusive; but to me he was exceptionally generous with all of his expertise.
He was in semi-retirement, though he was called out to restore Alfred Gilbert’s EROS in Piccadilly Circus, and to make an edition of six casts from it.

He guided me through the establishment of my own foundry here, and helped me through the production of my Frieze of the Wise and Foolish Virgins for George Street in Edinburgh (70’ long, 21/2 tons.)
At the age of 76 he could spend far longer on the scaffolding high above the street than could I. He helped personally with the 1-ton casting of the Fountain of Sabrina for Bristol, with all of its complex structure and engineering, and when I complained of failure would say, “Well, Gerald, you’re not casting a quadriga, are you?”

This essentially 19th century expertise which has been so underrated and consequently almost forgotten is not easily resurrected. Modern standards of bronze casting seldom achieve the quality of these earlier works, because modern welding and grinding techniques make repairs and corrections possible which in the past would have led to the rejection of the cast.
The skill in modelling and sculpting which had been handed down by either the apprentice system or in the art schools has also been lost in the eruption of modernism, the blind faith in novelty, and the laziness of the machine age. But you know all this…

In order to pursue this course I have therefore had to reach back, at least into the 19th century, and of course beyond. George pointed me in the right direction, and made me aware of the mechanics of it all.Have you looked at the work of the 19th C French ‘academic’ sculptor Dalou, who was exiled here after the Commune? He is nothing less than a super-realist. Or at the way in which Carpeaux’ apparent figuration has both the strictest geometry and the real impression of life,so that his figures seem actually to breath? I prefer him by far to his employee Rodin. Consider the epic physical struggle which went into the making of a work like “Ugolino and his sons,” or the perfect casting 9f a small animal sculpture by Rembrandt Bugatti.
These were intelligent and literate men. Modelling the figure or a portrait head is an essentially struggle. What is put in, left out, seen, not seen,is a measure of the artist. It is a wonderful procedure.
But now there is not even a critical language with which to discuss figurative sculpture. It is simply described as ‘classical’ because to the modern eye one figure looks much like another.
In the past the approach and interpretation was eagerly discussed, and had philosophical implications. Both concept and nuance were seen and understood. I look forward to the development of a new language without much optimism; it is a humanistic concern and therefore unlikely to generate much enthusiasm today.
The textbook most useful to me now is “Modelling and Sculpting the He.
Human Figure” by Edward Lanteri, who was Professor of Sculpture at the Royal College of Art a hundred years ago. Not much of use has been written since then, though I do have a good little book by Sergeant Jagger, creator of what I think is London’s most wonderful public sculpture, the Royal Artillery Memorial at Hyde Park Corner.
I do hope that some of this will be useful to you. We are off to New York on the 4th January.
I am very pleased that you like the head. It was handy that Goulandris procrastinated. I think I told you that Pavarotti is next.
I shall be in London in March and will hope to see you then. I have a good representation in the ‘British Art in the Sixties’ exhibition which opens on 10th March, and I am very happy to be having a major retrospective (showing mein kampf’.) at this year’s Edinburgh Festival.