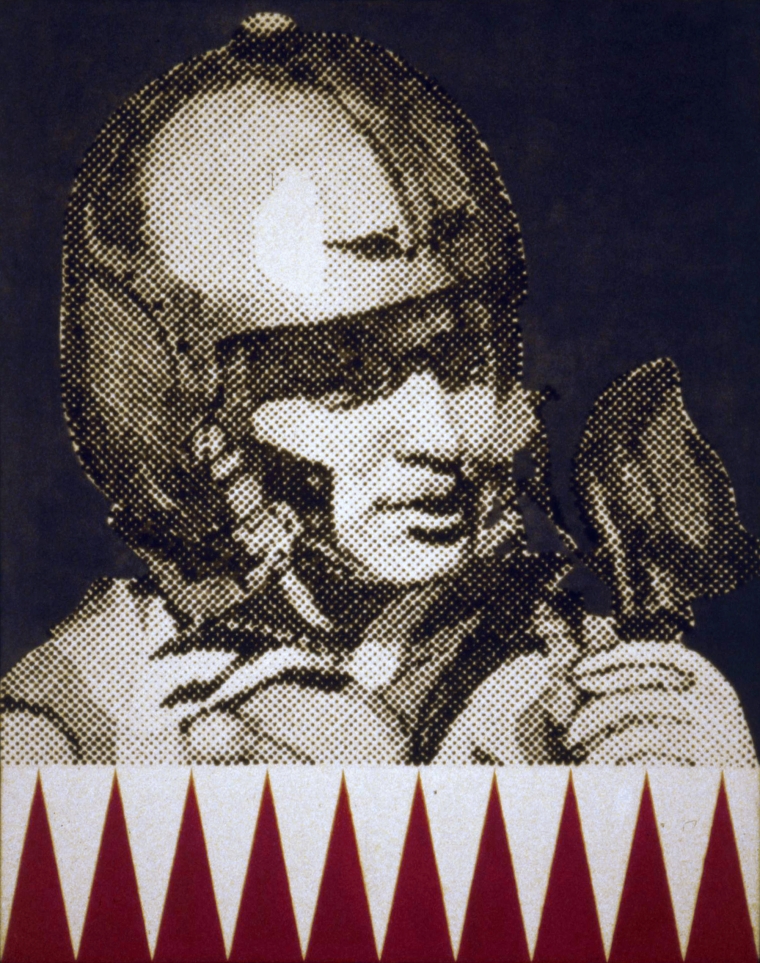 Navy Pilot was an innovation for three reasons:- 1) It was the first move towards the anonymity and formalisation given to the human figure by accoutrements. Although the face is bare, the helmet, gloves and mouthpiece combine to remove organic individualism and substitute an heraldic identity. The possibility was more fully explored in later paintings, but this painting bridges the gap between formalised interpretation of feature and formalised interpretation of accoutrement and display. 2) For the first time I used flat primary colour in contrast to the half-tone dots. I was particularly concerned with the edges between the different areas - they are more complicated than those in later paintings. I (unnecessarily) made a distinction in edge between the light and dark sides of the head, and took care to paint around each dot on the dark side while using clear arcs on the light side. 3) For the first time, being actually in America, I felt justified in painting about a (still garbled and schematised) American dream, which was better realised in the freedom of detachment on my return to England, but which is in the same way represented by the glamour and flash of the Navy Pilot.

In 1962 JFK famously declared his intention, ‘before this decade ends’, of putting a man on the moon and returning him safely to earth. Behind all this PR intense programmes of experiment and research were being carried out. Carefully selected military pilots were stressed and tested in simulations of what they might experience in space flight and zero gravity. Only the most technically competent and psychologically confident candidates were considered for the task ahead. Navy Pilot is preparing for extreme physical stress and disorientation during which he must consistently demonstrate his ability to continue to carry out his technical work ... the ominous zig-zag at the bottom of the canvas is a graphic metaphor for the monitoring equipment on which depends his acceptance or rejection as an Astronaut.