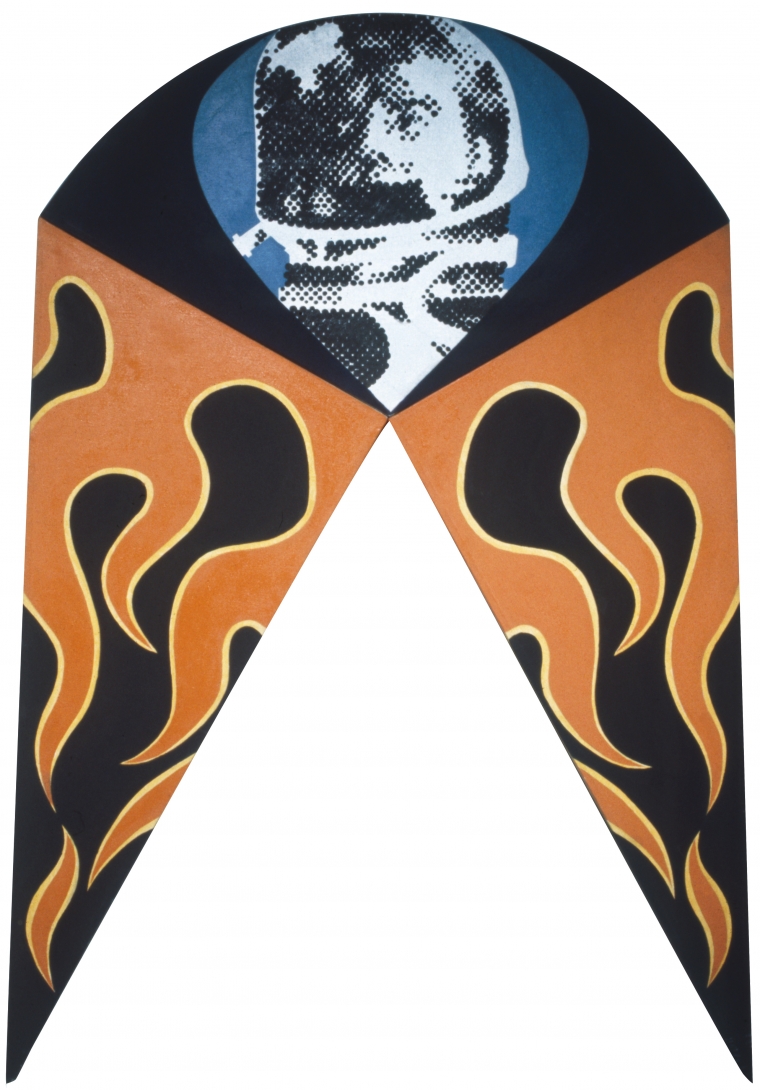 Re: Astronaut IV 1963, my CR no. 27: 1. Ground. Primer is most probably white household emulsion paint; 2. Silver background. I was at that time continually on the lookout for metallic silver to use in some of my paintings. There was at that time not much available. On occasion I used a metallic coated fabric, but I do not think that I did so in the case of Astronaut IV. If the back of the painting shows canvas, then the silver area is almost certainly aluminium paint with an oil based medium. It could possibly be spray paint such as Krylon; 3. Half tone area. Always painted with artistâs quality ivory black oil paint diluted with pure turpentine. I intended that the work methods, such as the ruled diagonal lines and sketch drawing, should remain apparent; 4. Flat coloured areas. I introduced flat colour to my paintings after working during the summer of 1963 with Robert Indiana in his loft on Coenties Slip in Manhattan. I invariably used artistâs quality oil paint with pure turps. The techniques of application (several thin coats using a chisel head squirrel hair brush, no texture or modulation, great care with the edges) owe a lot to Bobâs methods but are not so intensely perfect. In my works they are intended to refer to silkscreen or other similar commercial printing processes. Since Astronaut IV I never varnished or coated my paintings though perhaps I should have done!

Laingâs primary images were often small grainy photographs cut from daily newspapers, rather than slick magazine photography. As with many of the other British Pop artists, this scrutiny of photographic sources brought a growing awareness of American-derived media imagery, and Laing used many such images, including NASA photos of astronauts… as in this work.

Laingâs painting shows American astronaut Alan Shepard during his historic sub-orbital mission. The upper curve of the canvas suggests the curvature of the earth, and space is signaled by the blue background. The lower panels contain flamelike forms signifying those extruded from the rocket at liftoff. The fusion of photograph-derived imagery, the hand-painted dots, and the flat, almost Art Nouveau-like stylization of the flames makes this one of the major works on the subject.

A growing awareness of Pop Art generally, plus the presence of Richard Smith, Peter Blake, and Joe Tilson on the teaching staff of St. Martinâs School of Art in London where Laing was a student, led him toward contemporary imagery, and by 1962 he had developed his signature technique of hand-painting dots in varying sizes to imitate the effect of halftone photographic reproduction. Laing has described this evolution: “When I began using photographs as a starting point, I was interested in being able to make figurative paintings with a simple and unequivocal content which were at the same time ‘un-loaded’ from the point of view of previous figurative paintings. This was followed by a series of black-and-white literal representations of newspaper photographs… I used a grid of a predetermined interval and painted black dots of various sizes, thus making a halftone area which described form. This process amounted to drawing with tone, but from my point of view the feeling of ‘possession by recreation’ was the most important facet of this activity’.”

During the 1960’s, technological advances and the ‘space race’ between the USA and the Soviet Union were the focus of widespread public interest generating the common belief that the future would be transformed by science and exploration in space. Laing’s painting includes a scaled-up newspaper photograph of the American astronaut, Alan Shepard. The flames evoke rocket propulsion, presenting entry into space as a brave adventure, with the astronaut a modern-day knight in armour.