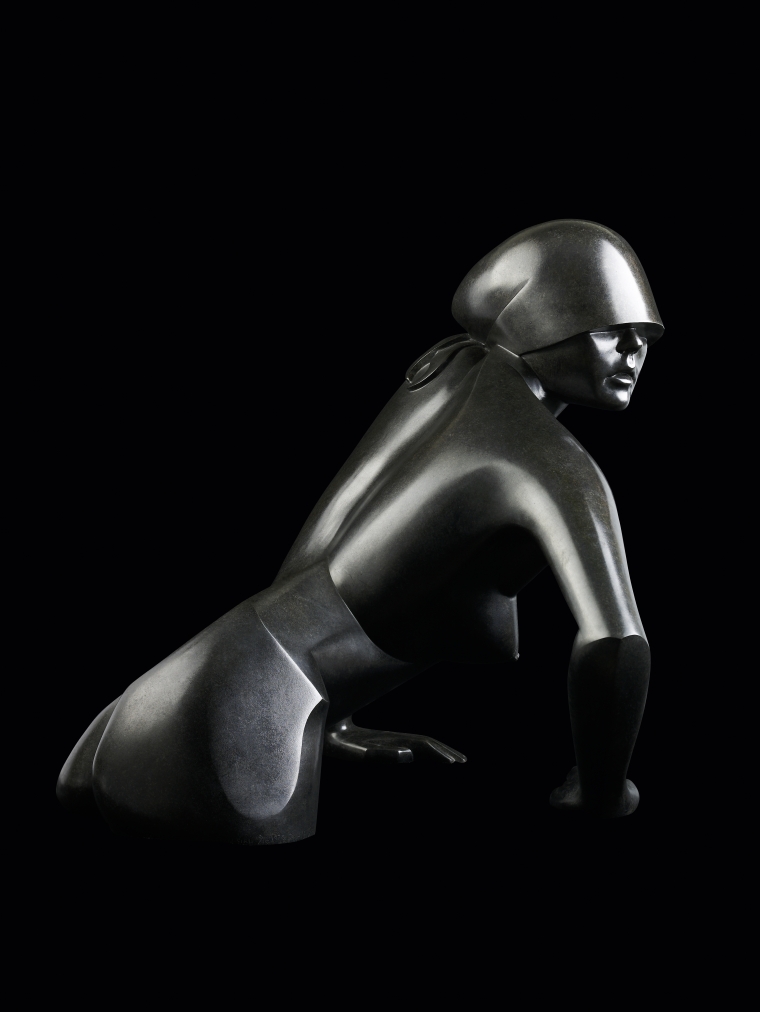 Edition of 10 plus 2 artist's proofs

An American Girl can be seen as the culmination of the Galina series of sculpture in which I worked through various formal and abstract figurations, absorbing all sorts of influences, in my search for a viable method of depicting the human figure: a figurative language. I carried out this work from 1973â8. Of the whole group only An American Girl, Dreaming, and Galina X have recognisable facial features… The headscarf is intended to be reminiscent of a US World War II helmet; it has always seemed to me that the large cranial size of these helmets gave US soldiers of the period a disturbing and paradoxical juvenile appearance. (The young of every species have large heads compared with adult specimens, and the signal transmitted by this induces protective reactions; the effect is hijacked as sexual attraction in women by the accent on âbig hairâ and large lips and eyes.) The contrast between the US helmet and the German one of the same period, which looks efficient and brutal, and the British one, which looks plain silly, like an upturned basin, is worth noting and the possible reasons for the difference is a fertile area for speculative conjecture.
The pose of An American Girl is Romantic, driven by the expression of aggressive consumerism. She is disruptive to the viewer: confident, seductive and relaxed. The figure seems conscious of this, but at the same time it is self-contained, introspective, and completely independent.
The geometric articulation of the spine and the almost landscape-like quality of the parts of the sculpture reinforce this enigmatic certitude, while other parts are extremely realistic, human and therefore vulnerable.

Between 1973 and 1978, using the same model all the time, I worked steadily towards a figurative sculpture with content - in other words, figures which satisfied both my aesthetic ideas and at the same time conveyed or symbolised some literal or philosophical notion. These are examples from this period.

It is almost as if his sculptural development can be seen as an art historical journey in reverse. This does not, however, mean that the current work belongs to the 16th, 17th or 19th centuries; it is inevitably rooted in the late 20th century experience of the sculptor himself. Often it is possible to make visual comparisons with the sculpture of the past: the cowled figures of An American Girl and Ecce Domino seem reminiscent of Claus Sluterâs Lacrimae figures for the tomb of Philip the Good at Dijon but in fact the artist was quite unaware of them at the time. One can also see echoes of Rodin and Michaelangelo, Benini and Gian Bologna but these come about because Laing is interested in these artists, in their own times, who were trying to solve similar philosophical and artistic problems.
What interests Laing in these artists and also those of classical Greece and Rome is not so much the forms of the sculpture itself but the way it interprets the society through the philosophies of classicism, humanism and idealism.
The contemporary arts have lost much of their constituency by becoming almost wholly self involved and by using an abstracted language so simplified that its relation to experience in our society has to be learned; a return to a humanist dialogue between the artist and his society is to be welcomed.