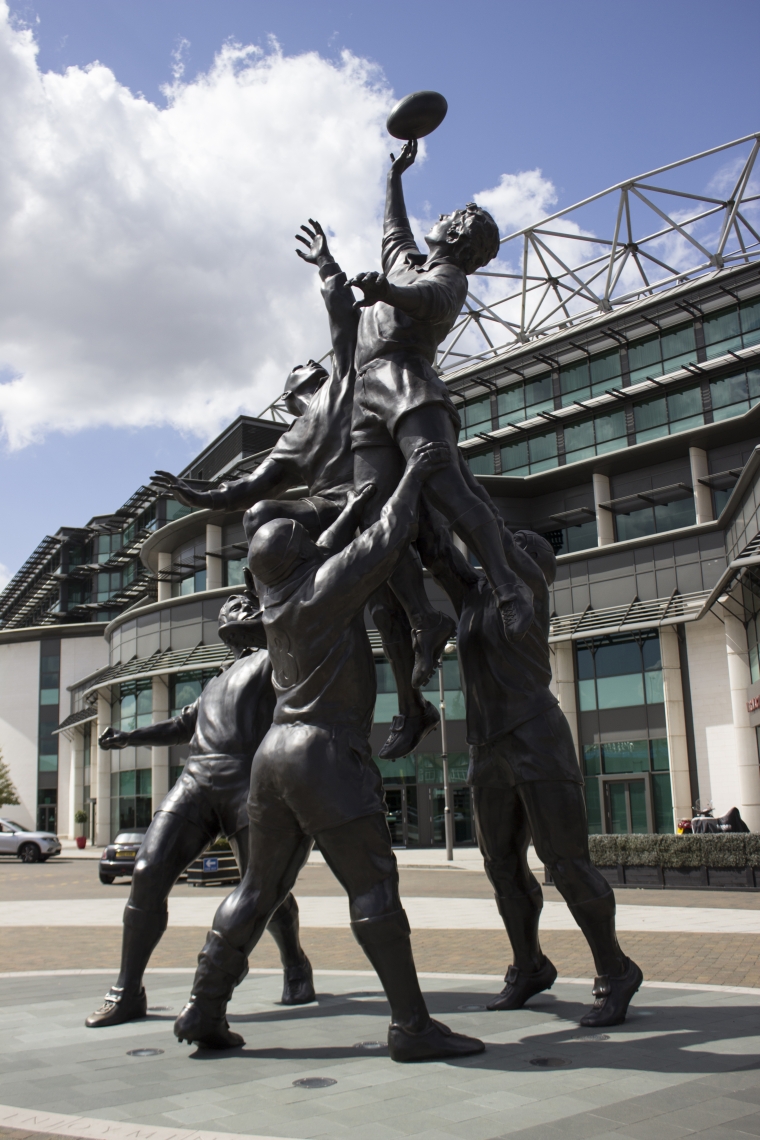 This sculpture was commissioned by the Rugby Football Union to stand outside the recently finished South Stand development at Twickenham Stadium. It was dedicated to the ‘core values’ of the union (teamwork, respect, enjoyment, discipline and sportsmanship), which are engraved in stone around the sculpture.

The Athlete in the Stadium is one of the greatest themes in the history of sculpture. So it was with great pleasure and indeed a certain sense of fulfilment that I accepted the commission for sculpture from such an eminent authority on sport as the RFU, first in 1993 and then again in 2009. I consider it a great honour to be so employed by such a distinguished patron.
Ever since I completed the first four figures for the Lion Gate, I have wanted to be given the opportunity of making a sculpture of a Lineout. The lineout is a particularly dramatic moment in what is the most dramatic of games. The combination of the powerful upward thrust, the tension, and the focused chaos combined are a gift for a sculptor.
Last summer I spent five months working exclusively on the three-quarters scale clay maquette. I leased for this purpose a wonderful and historic studio in Tite Street in Chelsea, one which had been used by, among others, John Singer Sergeant, [James Abbott McNeill] Whistler, and Augustus John. I do not think that I am being over dramatic when I claim that the shades of these great fellow artists seemed sometimes to be evident, and certainly my awareness of their example in their work improved my game.
When you work for an extended period of time on a large and complex task there is plenty of time for meditation and for the discovery of greater depths of meaning in the work.
Rugby is a game full of extraordinary dramatic moments, set piece compositions lasting only for a split second, which then dissolve and rapidly re-form in infinite variety. Common to them all is the single focus on the bal. In the lineout that necessary obsession becomes particularly evident, as the ball arches over the players who strain to reach it.
In my mind the ball became, as it were, the Holy Grail. In the lineout sculpture in front of you, the uppermost figure, the catcher, might therefore be seen as Parsifal. He was the only knight of the Round Table pure enough to be vouchsafed the Grail. In the situation before you, we shall never know whether or not he actually attains it, balanced as it is on the tips of his finger.
The five core values of rugby reside in all of my figures, in differing proportions. They are after all the basic necessities of good play, and without them you are diminished.
The catcher cannot fulfil his ambition unaided. He needs the selfless assistance of his two lifters. One is a battered and ancient man at arms, showing wounds sustained in many a friendly battle; perfectly reliable, always present where he is most needed, perfectly loyal, and content to act in the supporting role. All of this makes up for his apparent lack of grace. The other lifter is younger, neater faster, very competent, and much more nimble.
The failed catcher, swinging up the side of the main figure group, has lost control and shows a bit of panic. His powerful but flailing attempt to achieve the ball has been unsuccessful, even though it was his team which had the throw in. One of his lifters has been left behind; the other has swung away to the side, looking in his relationship to the whole group much as Alexander the Great looked as he tried to control his wild steed Bucephalus.
In the next instant, if there was to be one, this scene, now frozen in time, would disintegrate, and a new panorama of passionate strife would take its place.

Gerald Laing, 'Notes for the unveiling of The Lineout sculpture', unpublished manuscript, 2010