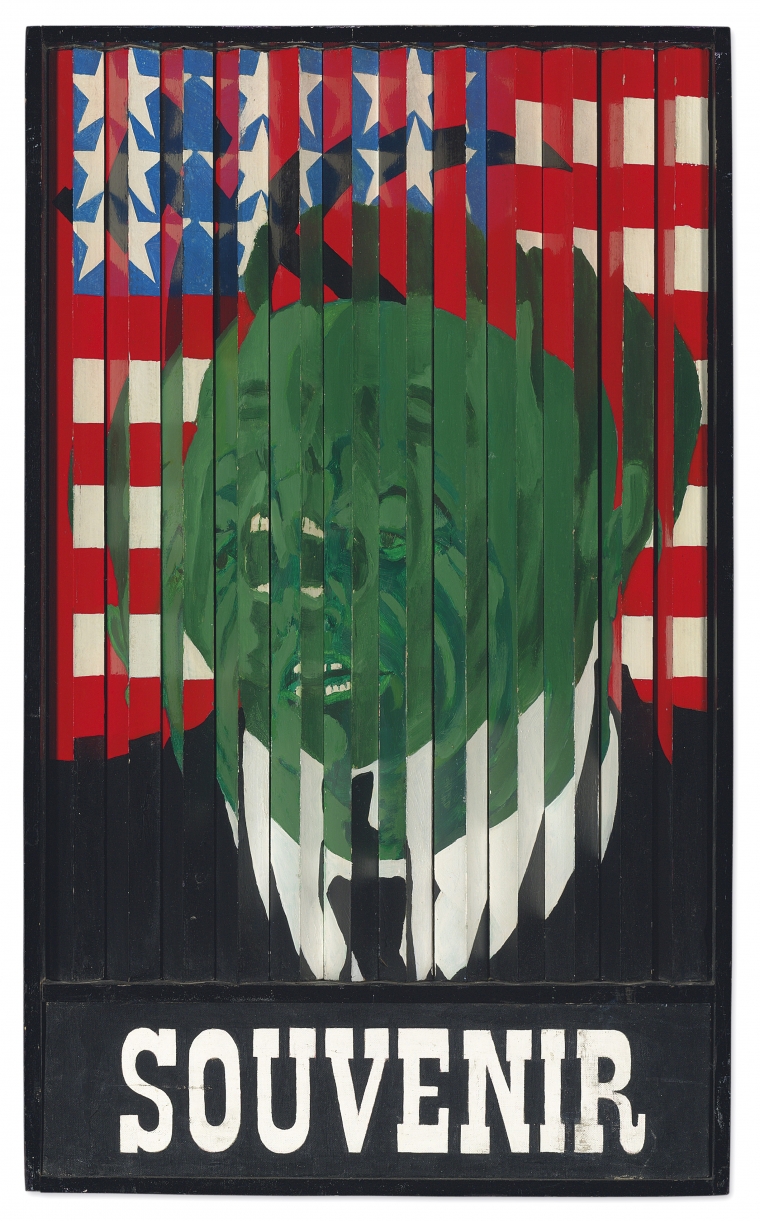 Oil on wood and oil on canvas laid over board, in the artistâs painted frame

Souvenir was painted in 1962, halfway through Gerald Laingâs four years of study at St Martinâs School of Art in London, and can be counted among the first of his Pop paintings at an early moment in the movementâs history. He created such works independently of the equally young Pop artists who were graduating in that year from the Royal College of Art â including Peter Phillips, with whom he was to collaborate on a sculptural project in 1966, Derek Boshier and David Hockney â and with only fragmentary knowledge of the early Pop works being created in New York by Andy Warhol, Roy Lichtenstein, James Rosenquist, Tom Wesselmann and Robert Indiana (for whom he was to work briefly as an assistant in the summer of 1963).

Though Laingâs Pop phase was to prove short-lived, ending in 1966 with his move into minimalist sculpture and later into more traditional sculptural portraits cast in bronze, his voice was a distinctive one in terms both of his subject matter and his technical procedures. Images rooted in gender identity predominated during that period, in his celebrations of the female beauty of bikini-clad starlets and celebrated movie stars and in the masculine bravado of his racing-car drivers, astronauts and sky divers. His art, however, unusually also had a dark side as a counterpoint to this concern with glamour and youthful exuberance. This was manifested particularly in the excursions into political territory that made him part of a select band of British Pop artists who looked critically at their society at a time of crisis and Cold War tensions: Boshier, Richard Hamilton, R.B. Kitaj (a reluctant influence on his younger Pop colleagues), Colin Self and Joe Tilson are the most notable of those in that rarefied company.

The Cuban Missile Crisis of October 1962, which brought the U.S.A. to the brink of nuclear war with the Soviet Union, prompted the making of Souvenir, caustically titled in commemoration of a terrifying 13 days of diplomatic brinkmanship on both sides. This relief was painted on wooden slats placed vertically across the surface, so that the image changes, both literally and metaphorically, according to the viewerâs point of view. Seen from the right, one is presented with a portrait of President Kennedy against the stars and stripes of the American flag; his mouth open, he appears to be in full flow, shouting, defending his countryâs safety against the threat of aggression represented by the Russiansâ siting of nuclear missiles on Cuban soil. As one passes across the painting and looks back, it is Premier Khrushchev who comes into view against the Hammer and Sickle; he, too, appears belligerent and out of control. Seen separately, each image has the clarity and simplification of poster art. It is only when one stands directly in front of the painting that these two independent motifs merge into one, creating a much more dynamic fused image that seems to shake and rattle as if about to explode. The worldâs most powerful two leaders of the time merge into what Laing himself later described as âa two-mouthed monsterâ. It would perhaps be more apt to describe this grotesque hybrid figure as âtwo-facedâ, each hypocritically dragging his countrymen into the most extreme and dangerous confrontation in the name of safety and the protection of their opposed political and economic systems.

Laingâs picture, painted when he was just 26, is remarkable in its confidence. Though articulated in the punchy style of political propaganda, it is disturbing precisely because it does not present the situation as a confrontation of good against evil, but as a complex and ambiguous interaction between unyielding and diametrically opposed positions. Though small in its dimensions, Souvenir is as bold visually as it is its political implications, embodying with great economy the threatening atmosphere engulfing the world at the height of the Cold War.

Laing painted other politically motivated pictures during his early Pop period, notably Lincoln Convertible 1964, on which he began work immediately after Kennedyâs assassination on 22 November 1963. Revealingly, on returning four decades later to the language of his classic Pop paintings, in works such as Only one of them uses Colgate 2004 and American Gothic of the same year, it was again in a spirit of political protest, this time against the human rights abuses by American military police personnel against Iraqi prisoners at Abu Ghraib. True to form, he reacted spontaneously and with righteous indignation to events portrayed in the news, using his art, as he had in Souvenir, as a weapon of political engagement.

Souvenir was painted in 1962, halfway through Gerald Laingâs four years of study at St Martinâs School of Art in London, and can be counted among the first of his Pop paintings at an early moment in the movementâs history. He created such works independently of the equally young Pop artists who were graduating in that year from the Royal College of Art â including Peter Phillips, with whom he was to collaborate on a sculptural project in 1966, Derek Boshier and David Hockney â and with only fragmentary knowledge of the early Pop works being created in New York by Andy Warhol, Roy Lichtenstein, James Rosenquist, Tom Wesselmann and Robert Indiana (for whom he was to work briefly as an assistant in the summer of 1963).

The images of Kennedy â Khruschev are painted on vertical one inch square wood strips set at 45 degrees in the frame, so that when the viewer looks at it diagonally from the left, Khruschev is visible; from the right, Kennedy; when viewed directly from the front, these two images merge into a two-mouthed monster under a flag composed of confused elements from those of their respective countries. This sums up in visual terms the attitude of many people at the time to the actions of both men, which seemed about to launch the whole world into a nuclear holocaust.

Laingâs âSouvenir of the Cuban Missile Crisisâ (1962), painted at St Martinâs School of Art, tricks the viewerâs eye to read either Kennedyâs or Kruschevâs portrait depending upon whether they are situated to the left or right of the work, thus suggesting an allegory of political âperspectiveâ. Viewed from the centre, the picture reads as a pattern of vertical flickers and optical interference.

Souvenir was painted before my first use of the half-tone technique, as part of a search for new ways of expressing the same ideas that have always concerned us, ways that were significant to us at our own time.

The British Pop artist Gerald Laing addressed the very issue of ideological blindness in an important painting from late 1962 entitled Souvenir (of the Cuban Missile Crisis Oct 16â28 1962), featuring both protagonists of the global showdown over the presence of Soviet missiles in Cuba: John Kennedy and Nikita Khrushchev. Because the work is painted on angled vertical slats, viewers see an image of Kennedy and an American flag when they are to its right, but from its left they encounter Khrushchev in front of the Soviet standard. Both representations take the form of simplified political propaganda, more reminiscent of caricatures than carefully studied portraits. In addition to mapping Cold War sides onto physical space, determined by the viewerâs position in the gallery, Souvenir dramatizes how viewers can interpret the same painting in radically different ways: Once one understands how the painting works, one can choose to see Kennedy or Khrushchev.

However, we should also consider the effect of the painting when viewed straight-on, which is how most people typically approach a work hanging on a wall. From this perspective, the painting is literally pulled in two ideological directions, resulting in a jumbled messâalmost like a period television flickering between two stations. The painting suggests that the fiercely partisan view imposed by the Cold War is not a natural way to regard the world; individuals have to look at the painting askanceâstepping away from a more natural exercise of oneâs visionâto see an uncomplicated representation of the leaders of capitalism and communism. The paintingâs central view better represents the everyday experience of the Cold War, especially in countries other than the Soviet Union and the United States: a resistance to aligning oneself rigidly on either side of the conflict. Between the two poles, reality was contentious and scrambled. In 1957, just a few years before Laing painted his canvas, the French filmmaker Chris Marker made a similar point in his documentary Letter from Siberia when he repeated footage of road workers in a Siberian city three times, each with a different voice-over: one from a staunchly Soviet perspective, one from an American one, and the third straddled between the two. Markerâs film exposes the way that even âobjectiveâ imageryâwhether in photographs or filmsâcan be twisted by narration or captions.