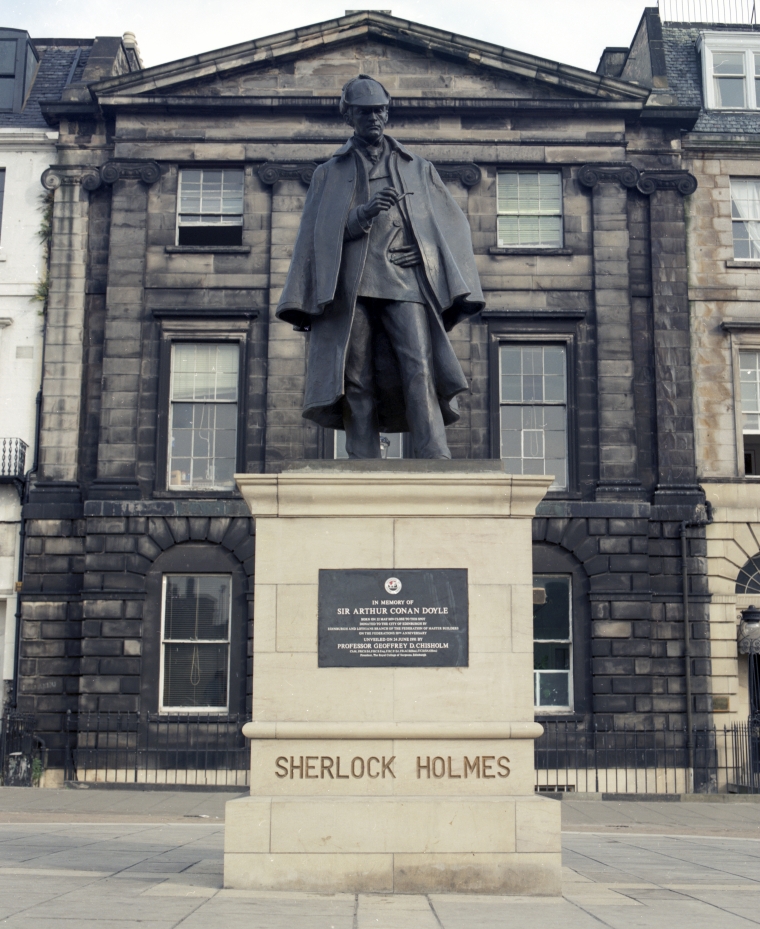 The Conan Doyle Memorial consists of a 7’ 6” bronze sculpture of Sherlock Holmes on a 6’ high sandstone plinth. The sculpture weighs about 750 lbs and it was cast in my own bronze foundry in the north of Scotland. It is sited at the birthplace of Sir Arthur Conan Doyle in Picardy Place, Edinburgh, and it was commissioned by the Edinburgh chapter of the Federation of Master Builders to commemorate the fortieth anniversary of the founding of the Federation. It is also an important feature in the scheme for the rehabilitation of the Picardy Place roundabout and its adjacent landscaped areas.
Holmes is shown meditating on the death of his author which, to a fictional character, is tantamount to the death of God. His pipe has the words ‘Ceci n’est pas une pipe’ inscribed around its bowl as a homage to Magritte and in recognition of the surreal quality of this commission. On the base of the sculpture is the enormous footprint of the Hound of the Baskervilles.
The image of Sherlock Holmes has been altered and embellished by the input of all those who have interpreted him in the years since Conan Doyle first described him. We find it rather surprising that nowhere in Conan Doyle’s original text is Holmes described as smoking anything other than ‘a straight briar pipe’. He most often wears a ‘long grey hooded travelling coat’ with his deerstalker hat. Very occasionally in the contemporary illustrations by Sydney Paget for the Strand Magazine, he is shown wearing an Inverness cape, invariably topped by a bowler hat rather than a deerstalker.
Watson describes Holmes as ‘... rather over six feet, and so excessively lean that he seems to be considerably taller. His face was a narrow one, his forehead large, his hair black, his brows dark and heavy, his nose thin and firm. His eyes were grey and particularly sharp and piercing, taking on a faraway and introspective look when he exerted his whole powers’...
Basil Rathbone, whose Holmes is probably the most familiar to us, seems to have based his character on Gillette’s interpretation as much as on the original text.
In any interpretation of a mythical figure, one is obliged to select and indeed create the details which make up the whole. My own version of this most famous figure in all of literature has been composed in this manner. Sherlock Holmes is by no means the only icon which has evolved, and indeed continues to evolve, to suit the conceptions and requirements of different times.