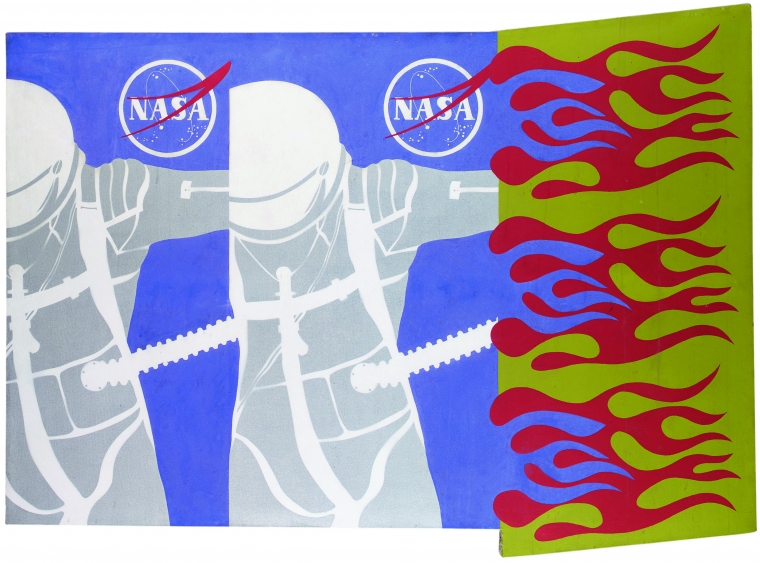 In the earliest days of space exploration, beginning with the Russian Yuri Gagarinâs first orbit of the earth in Sputnik I, followed in short order by the American Gordon Cooperâs twenty-two orbits, the general public followed each new event with an avidity which no longer exits.

The technology, from the giant rockets, capsules and launch sites to the spectacular space suits with their air-conditioning equipment attaching each astronaut to a small suitcase by a convoluted umbilical cord, and such arcane items as zero inertia tools for use in weightless conditions, were frequently illustrated in the press.

My painting, Panoply, reflects these obsessions. I depicted the astronauts â who were possibly our last hero explorers - as though they were knights displayed on a medieval brass memorial, with the NASA badge as their coat-of-arms, and the shaped canvas parallelogram as their banner of flames.

All of this is in contrast to todayâs attitudes. We have no clear general idea of what equipment or how many men are in space at any given time. Perhaps this is because to the average person space is now simply empty, but for cluttered inanimate debris.

Laing is unusual amongst British pop artists in that having moved to New York in 1964, almost all his pop work was produced in an American rather than British context. His initial imagery, which drew on newspaper representation of movie stars, developed into work based around the issues of perception of glamour in roles such as drag racers, astronauts and skydivers. The images are highly stylized and provide an interesting complement to the contemporary work of Peter Phillips with whom Laing collaborated on Hybrid, a project where the resultant work was dictated by the demands of consumers.

The shaped multi-part canvases (similar to the contemporary experiments of Hockney and Jones) allowed for divisions of the imagery and here we see the duplicated NASA astronaut given a sense of speed by the stylized flames more commonly seen on drag-racers and custom cars.

In his painting, Panoply (1964) Laing clothed his astronauts, schematising them as iconic, head-on - like his âcontinentalâ film stars - and he decorated the painting with insignias; the badge of NASA and vernacular âhot-rodâ flames. The result is akin to Allowayâs description of âSituationâ paintings as banners - except Laing literalises the heraldic aspect of the astronauts into a techno-chivalric pennant.