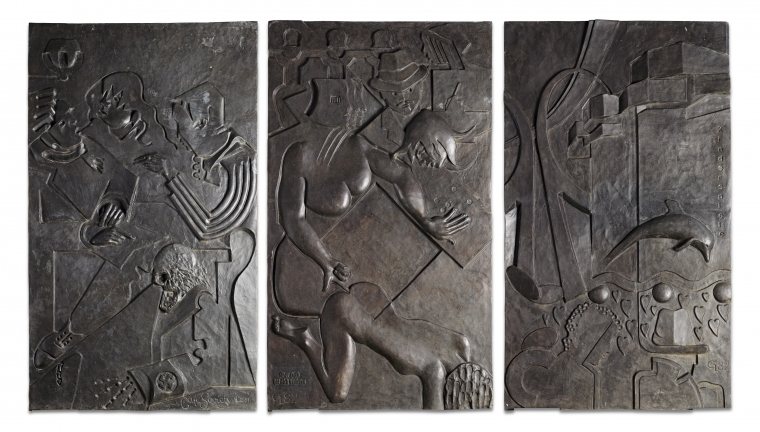 The Hamburg Triptych is a narrative composed of images perceived during a visit to that city in November 1981. Though it is an image of Germany, I have used it more as metaphor for my own state of mind at the time, and as an exorcism of my own demons at a particularly difficult point in my life. It is therefore essentially a subjective work.
Panel I - Cafe Society. At 3am three fashionable young Hamburg men sit around a table in a cafe with 1930’s decor discussing literature. They are all wearing cashmere scarves of different colours wound round and round their necks, Mephisto-style. Underneath the table is something which is not discussed, but at which one of the men is unwittingly pointing. It is the corpse of an SD [Sicherheitsdienst] official. His body, slumped in rubble, has decomposed badly. His uniform, especially his armband, appear to remain uncorrupted.
Panel II - Der Held Hat Sich Verloren (The Hero has lost himself). In the back kitchen of a bordello on the Reeperbahn are a group of figures. One is Domenica, Hamburg’s most famous madame, who is an enormous Italian woman of great power, dressed in her underwear. The Hero, drunk, sees her face in triplicate. He hangs his head in a stupor, watched over by the Heavy, who is dressed like a Chicago gangster. There is money on the table. Behind them a quiet procession of young prostitutes dressed in different suggestive outfits, but appearing like a string of paper dolls, give the money they have taken for their services to an elderly woman dressed as a hospital matron, who enters their takings into an account book. Beneath the table a beautiful girl is being goosed by Domenica; this indicates the true nature of the relationship between madame and prostitute. The organisation of the brothel stands between the Hero and the young girl.
Panel III - Kinderspiele (Games for children). The sophisticated double-loop rollercoaster of the Hamburg fairground, together with sentimental items - a dolphin, heart-shaped cookies - are juxtaposed with the Hamburg Bunker, a fortification which in fact stands next to the fairground. It is a grim, shrapnel-scarred, six storey edifice with a great array of gun platforms on top of it. It is so strongly built that it is almost impossible to demolish. It has therefore been filled with boutiques, art galleries, and shops - the usual fate of a building whose original purpose has ended. Below, two figures stand in stubborn argument.