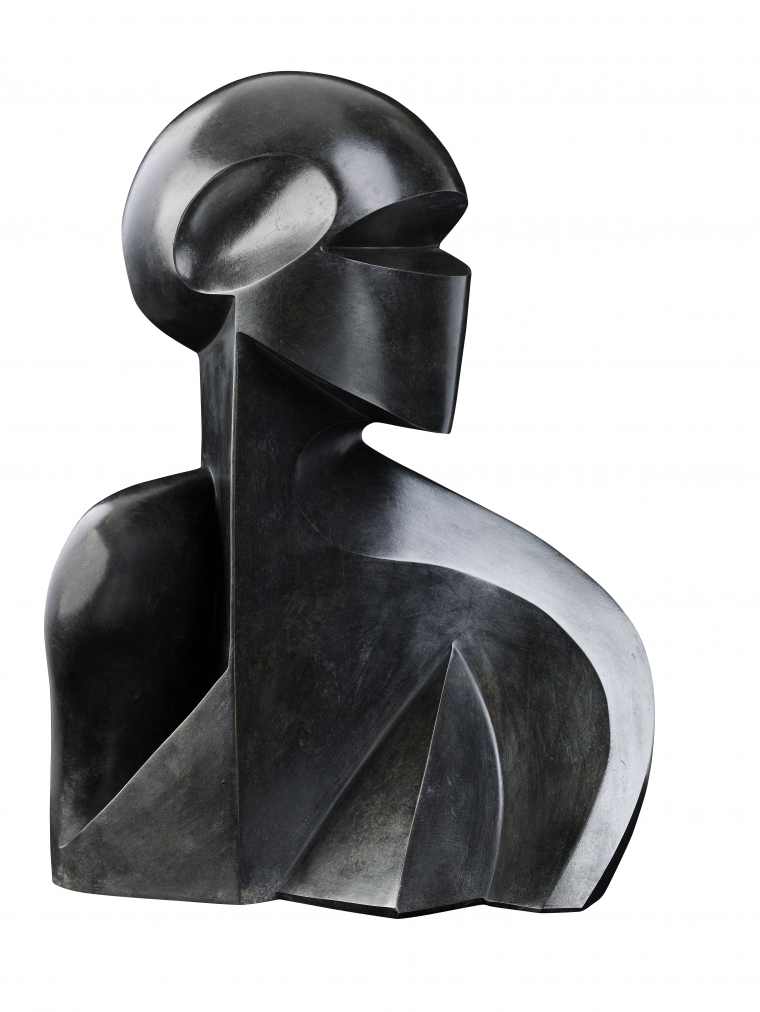 After this piece Laing abandoned straight lines in favour of biomorphic forms. There followed a series of variations on the head and body of his wife Galina in which Laing was seeking to find within the body a very complex system of balancing voids and solids, in deliberate contrast to the simple theme of his often repeated pyramids. These pieces are small and do not demand enlargement, in line with Laing’s disillusionment with public sculpture. However, it is clear that this sequence of pieces is only a pause and that Laing’s real interest still lies in projecting a consciousness of the human body on to a vast scale, or of finding forms that seem to convey the possibility of this dual meaning and scale within them. For when, after the series of heads and busts, he turned to a reclining female figure, it almost immediately assumed this ambiguous, half-monumental character, and was followed by others, more abstracted and like horizontal reliefs, in which Laing is quite obviously designing on an architectural scale. These works are not in the exhibition and cannot be fully discussed, except to say that they are more evidence of the true connection between the body and architecture as twin fundamentals of sculpture, and give reason to hope that Laing has not created his last Twentieth-Century Monument.

The Galina Series (1973â1977) shows the route by which I returned from abstraction to the figure. The influence of the strict geometry of my abstract sculpture is evident in most of the work, and indeed is present even in my most recent and objectively arrived at images; for nothing is wasted, and we represent the sum of our experience.
Galina I is the very first step in this new direction, the moment when I abandoned fabrication and took up clay, thus allowing myself an infinite vocabulary of form. The other eight sculptures in the series were made during the next four years, variously at Kinkell, in Amagansett, Long Island, and in Albuquerque, New Mexico, where I spent a year at the University as Visiting Professor of Painting and Sculpture. These were not, of course, the only works I produced during that four year period; you will note from the serial (CR) numbers that in fact I made a further seventy images between May 1973 (Galina I) and February 1977 (Galina X), all of them exploring different methods by which the human figure might be represented.

In Galina I, the breast is a perfect demi-pyramid; one shoulder is organic and tender; one is geometric. The true vertical line up the centre of the work which ends in a depressed oval which refers to the soft indentation of the temple, is at the same time a conscious homage to Picassoâs Femme-Fleur.  (Picassoâs sculpture was a big influence in the early part of the Galina series).  The heads, however, beginning with Galina I, are derived from comic heroes such as the Silver Surfer (who rode the stratosphere looking down and murmuring to himself, ‘Alas what fools these mortals be’). And these comic images have, of course, roots in Japanese art and applied art, and probably run much deeper than that into the elemental human psyche.