Four Events in the Experience of an Astronaut 1963 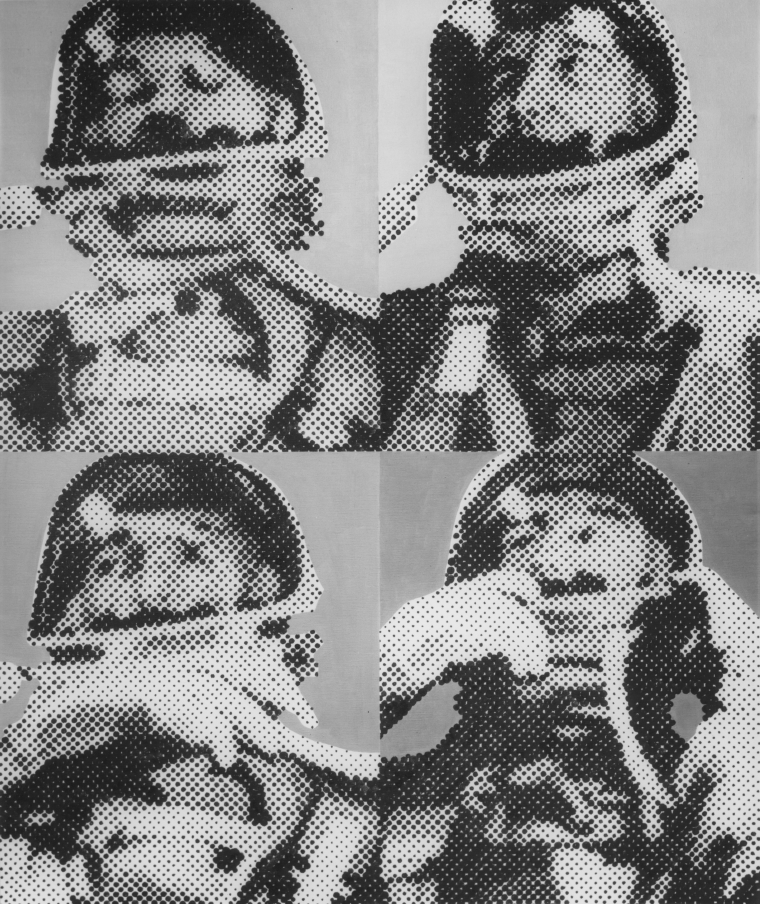 Four Events in the Experience of an Astronaut

The repeated image owes something to advertising techniques, but more to the traditional device of placing the hero in several different positions in one panel which was common both in Eastern and in MediÃ¦val European painting. This device naturally implies that the painting is dealing with a series of events which take place over a given elapsed time, rather than with one particular moment. In Four Eventsâ¦ I was interested in the small changes in position and expression in the four portraits, representing four different, arbitrarily seized moments.
The quartering of the canvas is a deliberately heraldic device which in fact flies in the face of classical concepts of composition.

The use of silver is evocative of the silvery, moonlight quality one associates with extra-terrestrial events, and the slight alteration on tone in the four quarters imply slightly different photographic conditions during the four ‘moments’ which go hand in hand with the differences in the subject.

The first image which prompted my series of Astronaut paintings… showed Alan Shepard in his capsule in a group of four slightly blurred time-lapsed photographs, the blurring adding to the mysterious quality of his activities. I painted all four images in one painting, using black and silver paint, extending the time span of the image across the sequence of events depicted. I gave this painting to Robert Indiana, and painted a portrait of him as well, using the same system… Alan Shepard is shown at four different moments during his journey into space, just as in a religious painting Jesus might be shown performing miracles, riding into Jerusalem, facing Pontius Pilate, being crucified and ascending into heaven.