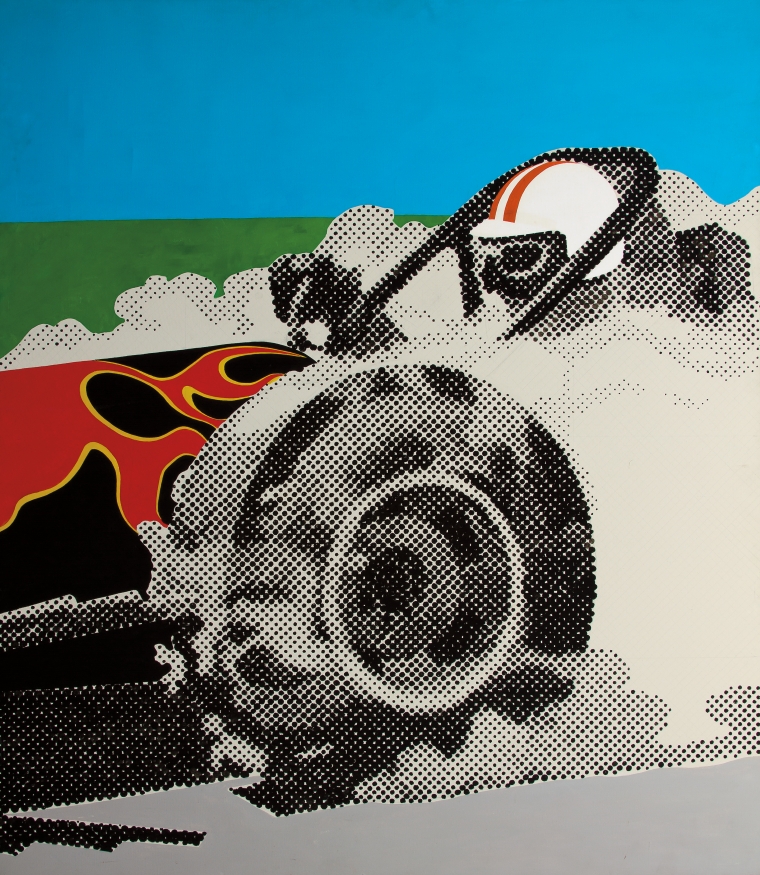 Dragster I is a logical follow-on from Navy Pilot. In it, the formalisation of the figure is carried a stage further, so that the features are entirely hidden and the car itself occupied the position of the major image. This painting, however, is not as formal and ‘displayed’ as are later dragster paintings - for instance, the car is placed obliquely on the canvas so that the thickness of the tires can be seen, and there is some attempt at landscape behind it - landscape which started as trees, was then reduced to an undulating horizon, and finally painted out to a straight division of green and blue or grass and sky. The smoke from the tyres is explored formally, but not so thoroughly and consciously as, for instance, in AA D. The subject was first chosen for its formal possibilities and American myth qualities. The car is Swamp Rat IV, one of the record-holding dragsters owned and driven by Don Garlits.

My first dragster painting was based on a photograph of Don âBig Daddyâ Garlits, who was the champion driver for many years.  He came fro Tampa, Florida and named all of his cars âSwamp Ratâ; the one shown in my 1963 photograph was Swamp Rat IV, though there were many more still to be built and raced. These cars, specialised to such a degree that their engines can only run for a few seconds, are designed solely for straight line acceleration over a quarter-mile course. The terminal speed record for this type of racing now stands at over 250 mph in under four seconds from a standing start.  It is the most violent acceleration from a standstill known to man, and the cars are extraordinary objects, very long and slender with massive rear tyres to provide grip, and slender front wheels to provide the minimum amount of steering which is necessary to keep the car going in a straight line during its brief moment on the track. The driver sits just behind the rear axle and the engine, supercharged and running on exotic fuel mixture, is positioned just in front of it to place the maximum amount of weight over the driving wheels.  As the wheels grip, vast rolling clouds of smoke from the burnt rubber of the tyres billow out behind the car, and when the engine is cut a few seconds later at the end of the strip, in the sudden silence a parachute is popped open, bringing the car safely to a standstill.  The cars and the helmets of the drivers are painted in bright heraldic colours and the cryptic symbols of the sponsors. They race in pairs down the quarter-mile track in bright sunshine and it seemed to me that they represented a modern version of the joust in almost every respect. The extravagant and ruthless specialisation reminded me of armour designed especially for the tournament; the ceremony and the curious rituals, some necessary and some simply a matter of style, cried out for commemoration.