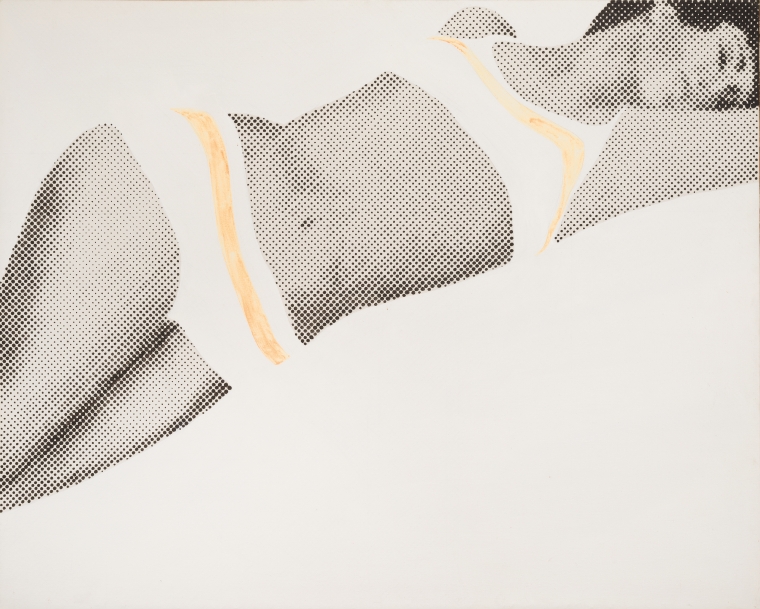 Painted in Tony Curtis’s studio which he’d lent to me while I was in LA for my exhibition. January 1965.

Tony Curtis gave me the use of the studio at his house for the rest of my stay which was just as well because I have always found it impossible to enjoy the luxuries of surf, sun and sand… In Tony’s studio I painted another of my starlets, this one entitled Commemoration of page 98 of the January 1965 issue of Mademoiselle.

Executed in 1965, Commemoration is a captivating large-scale example of Gerald Laing’s pioneering Pop Art practice. Capturing the heady glamour of the Swinging Sixties, its seductive, bikini-clad figure is based on an image found in the January 1965 edition of the American fashion magazine Mademoiselle. The ultimate siren of British Pop Art, Laing paved the way for the movement’s development on both domestic and international scales through his unique appropriation of media images. Composed via a series of gradated dots on raw canvas, the work bears witness to the artist’s innovative hand-made replication of mechanical printing techniques - a method first developed in 1963, arguably preceding Roy Lichtenstein’s engagement with the ‘Ben Day’ graphic process, and Sigmar Polke’s later rasterbilder. Following on from his earlier depictions of icons such as Brigitte Bardot and other French nouvelle vague film actresses, 1965 saw the artist turn his attention to the world of everyday commercial advertising. As David Alan Mellor writes, ‘the “heraldry” of leisure and sexuality laps over and invades the bodies of his “beach girls” - those recruits from contemporary surfing mythology and their endless summers - in his bikini paintings and prints. These pin-ups come before us in the guise of modernised vanitas images’ (D. A. Mellor, ‘Gerald Laing: Swift Passages and the Monumental Imagination’, in Gerald Laing: A Retrospective 1963-1993, exh. cat., The Fruitmarket Gallery, Edinburgh, 1993, p.11). At the same time, the linear elegance of the figure positions the work within a more classical art-historical tradition of reclining nudes, resonating in particular with Henri Matisse’s Odalisques. The present work was exhibited during the year of its creation at Feigen-Palmer in Los Angeles - a gallery that was responsible for disseminating Laing’s work to an international audience following the artist’s move to America in 1964. Acquired directly from the artist in 1965 by the present owner, this is the first time the work has been seen in public since the exhibition.

With its alluring subject matter, culled from up-to-the-minute fashion photography, Commemoration speaks directly to the 1960s zeitgeist of sexual liberation, consumer culture and mass-media. Like his American counterpart Andy Warhol, who also appropriated images from the worlds of press and advertising, Laing’s independent elevation of iconoclasm, sex and commerce to the realm of high art became integral to the development of the Pop movement, both in Britain and the United States. ‘I chose photographs which appealed to me,’ Laing explained, ‘ones which I wished to make more permanent than the essentially ephemeral nature of the daily press would allow, and which were also absolutely of the moment’ (G. Laing, quoted in M. Livingstone, British Pop, exh. cat., Museo de Bellas Artes de Bilbao, Bilbao, 2006, p.435). Dramatically amplifying the scale of his disposable source images, Laing mimicked and enlarged the screened dot systems of half-tone photo-press pictures found in newspapers and magazines. Extending over the edges of the canvas, the black dots articulate the figure in dialogue with the raw weave of the fabric, whilst passages of white paint, bisected with fluorescent orange streaks, mark the model’s bikini. Despite its emulation of mechanical reproduction processes, the present work harbours the traces of the artist’s hand: the original pencil grid and outline of the figure are visible beneath the painted layers of dots, demonstrating the precision and great skill of Laing’s draughtsmanship. As the artist notes ‘It was a systematic and pseudoscientific method of constructing a human image which disintegrated into its separate dots on close examination, and coagulated to become legible when seen from a distance. There was no accident of brushwork and no illusory atmospheric space. In that particularly it can be seen as a reaction against the vague and speculative content of Abstract Expressionist paintings’ (G. Laing, quoted in M. Livingstone, British Pop, exh. cat., Museo de Bellas Artes de Bilbao, Bilbao, 2006, p.435).

While this technique shared some visual affinities with Polke’s hand-painted raster dots, which sought to critique the mechanisms of mass media, Laing’s work ultimately celebrated - rather than subverted - the language of Pop culture. The artist’s fascination with American consumer iconography can be traced to his schooling under Richard Smith at St. Martin’s in the early 1960s. Smith had recently returned from a trip to New York, and was exploring advertising, mass media imagery and cinema in his ICA lectures and film screenings. ‘I began to look for systematic approaches to the task and found them in the new commercial images which were appearing around us in increasing numbers as the economy began to thrive’ Laing explains. ‘So strong were these to our eyes, accustomed as they were only to the peeling stucco of wartime neglect, that they seemed to eclipse reality and acquired the pungent authority of the icon. Standing on the tube platform on my way to St. Martin’s in the mornings, I was transfixed by the crude but powerful printing processes used in poster advertisements, and the ambivalence between the whole image which they contained and the means by which it had been created - the dots and lines and cacophony of form and colour visible at a short range, and the reassuring integrity of the image at a distance’ (G Laing, quoted in M. Livingstone, British Pop, exh. cat., Museo de Bellas Artes de Bilbao, Bilbao, 2006, p.435). It was only after commencing his own investigation into the language of mass media that Laing went to New York, where he became aware of artists such as Warhol and Lichtenstein who were operating under similar agenda. His relationship with Feigen in New York and Herbert Palmer in California brought him great success, paving the way for his steady rise to international acclaim, and a productive period of cross-fertilization between American and British Pop practices. Bold and beguiling, Commemoration may be understood as a product of this exciting, ground-breaking time.