Only One of Them Uses Colgate 2004 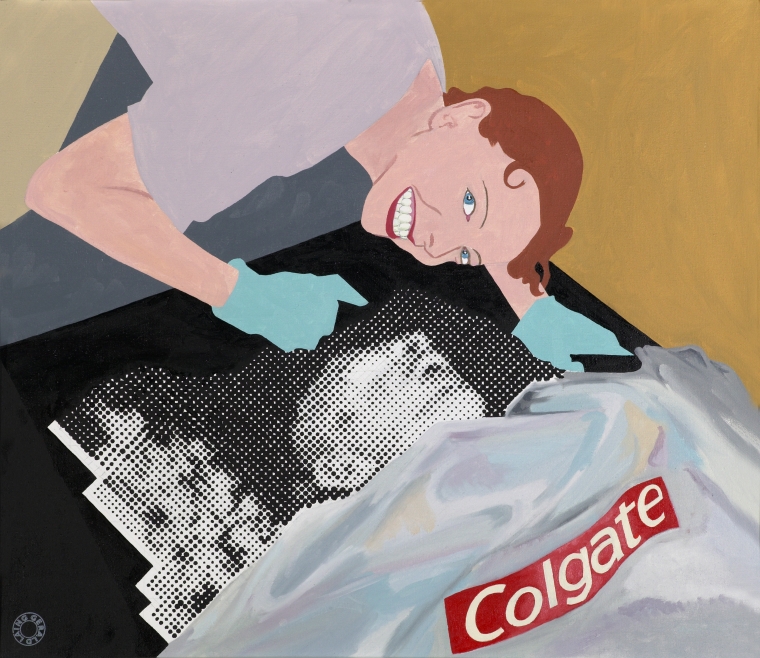 Only One of Them Uses Colgate

Its title [is] taken from George Bush’s response to what he and Tony Blair have in common (‘We both use Colgate’). It takes as its visual basis another well-known image of the war, in which a grinning American female soldier poses over the body of a dead Iraq captive. Gruesome enough in the original, in Laing’s hands it takes on a particularly sickening resonance. He paints the guard as a super-clean, all-American gal - a Sixties advertising icon. The dead man, contained within his monochrome dot-matrix, seems to have become no more than a piece of dirty household waste; gleefully eradicated by this rubber-gloved domestic goddess. As Laing says, it’s as if his starlets of the Sixties have grown up into the chillingly cute female sadists of the Abu Ghraib prison. This transformation might stand as a metaphor for the lesson which surely underlies all of these new works. For however justified the war, the method of its execution has been an unpalatable revelation of the ruthless political reality of the American empire.
Whatever Blair would like to believe, Laing is simply reflecting the fact that Britain has fallen out of love with the dream of the US. It’s not that we don’t like Americans, it’s just that any remaining illusions have been shattered. The promise of Pop no longer holds true and nowhere is that put more clearly than in Laing’s searing indictment of the inhumanity of war.