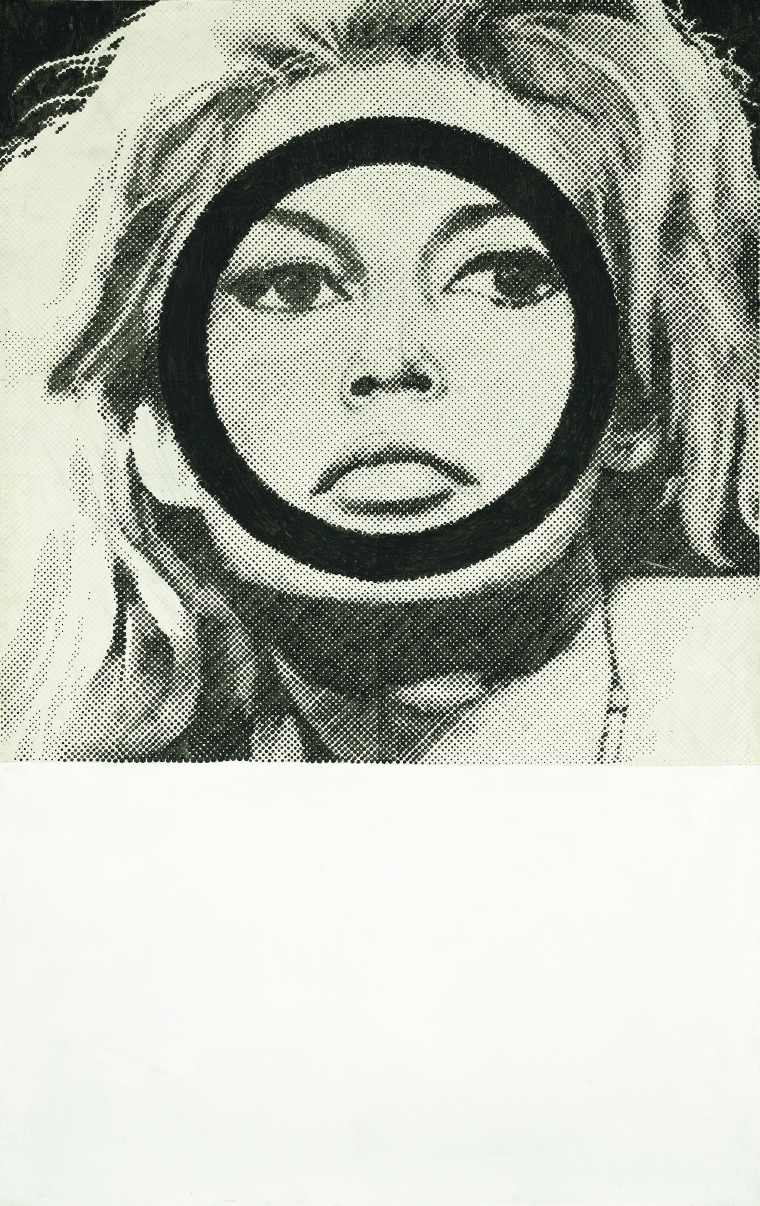 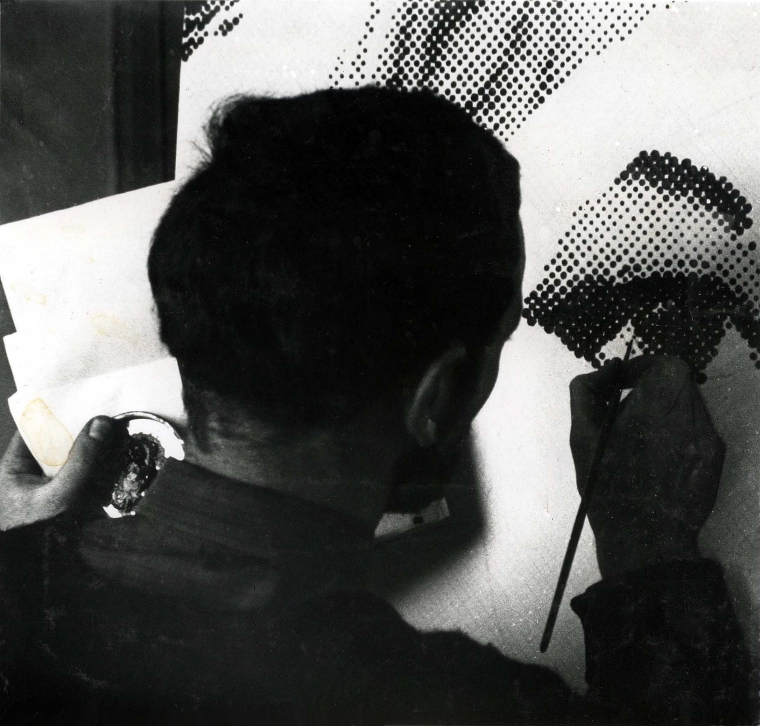 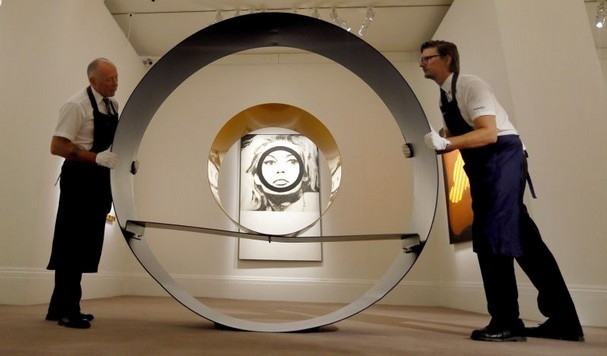 Late in 1962, the invitation to submit work for the annual Young Contemporaries exhibition was circulated throughout the art schools. The logo for that year consisted of a grainy dot black and white photograph of the face of Brigitte Bardot, on which a black annulus had been superimposed.  The stated intention of the graphic designer was that by including those two images he had inferred the type of work of which the exhibition was likely to consist. The popular icon of the film star would naturally seem relevant to our group, and the severe abstraction of the annular disc which would perhaps appeal to the numerous contemporary enthusiasts for Russian constructivism.  To me, the entire image seemed like a gift and I determined to appropriate it in its entirety.

It thus became the subject of my next painting, enlarged, gridded and recreated on a canvas five feet high. The temerity of taking the advertisement for the exhibition and turning it into a part of the content - a complete reversal of the usual sequence of events seemed absolutely appropriate; the blurring of the contrast between advertising and art, and the cupidity of the enterprise had a perfect and inevitable symmetry.  The selectors, all students, agreed and âBBâ, together with my paintings of ClÃ©o from 5 to 7 and Roger and Annette Take Coffee were accepted for the exhibition which took place in February 1963.

This painting was the first really successful one based on the conception of the half-tone screen. The image was taken from the poster and entry-form for the 1963 Young Contemporaries group show, a show for which I knew I should enter the painting before ever I commenced painting it. I chose the image for a variety of reasons - the combination of the circle and the half-tone girlâs face, expressing, as it was intended to by its designer Mike Foreman, both hard-edge and Pop painting, I found very satisfying and very pertinent to the tonal interests I had at that time. The anarchy of painting the already existing poster for a future show and thus, in a sense, claiming it for my own, also appealed to me. Brigitte Bardot is the most extreme example of figurative painting based on a modular structure, i.e. the dot, that I produced. The ruled surface of the canvas produces an all-over grid, even though the dots are not placed on every intersection. I had learnt the value of leaving the lightest areas bare, and also found that with the increase in image-size I could better achieve the effect of disintegration into units at close viewing range.

The white section at the bottom refers both to the conception of the painting as a large piece of graphic or mass-media flotsam (in some ways a harking-back to graffiti) and also to the traditional composition idea of the Golden Section.

One of the ideas with which I was involved was the iconographic significance of figures such as B.B. - I remember comparing, for example, significance of St. Sebastian in the middle ages with Elvis Presley now - certainly they have similar comparative notoriety.

Laing’s paintings of film stars then are on one level quite simply attempts to possess the unpossessable, but they are also comments upon this attempt. The technique of the painting depersonalises the subject and in the end renders them as remote as they were originally. The painting Brigitte Bardot is not so much a painting of Brigitte Bardot as of the Public Relations Officer’s version of Brigitte Bardot.

Choosing a group of French female New Wave film stars - Anna Karina, Corinne Marchand and Annette Stroyberg, (as well as the standby pop pin-up of French film, Brigitte Bardot) - Laing took the photographic screening process that reproduced their faces and fame for publications, and then produced over sized images of them in paint. This technique was entirely independent of Roy Lichtensteinâs use of graphic âBen Dayâ dots and his universe of comic books: it atomised the photographic referent, blowing it up, in the case of Jean-Luc Godardâs star, Anna Karina, to twelve feet high; an echo of Richard Smithâs then current rehandlings of hoarding sized scale. Laingâs investigation of the materiality of the starâs photographic apparition was parallel to Warholâs silk-screened paintings of image-scavenged stars, again unknown in London at that time. Laing dwelt on a theme of publicity and the consumption of these star personages, through the industrial surfaces of reproduction - an area in English art that only had a pre-history in Sickertâs coarse-textured paintings of the nineteen-thirties. Interviewed in the Evening Standard, Laing said, âWe donât know Brigitte Bardot - we know her through the newspaper imageâ. The face of Brigitte was, promotional, monochrome, alien in its grille of information; Laingâs strategy was utterly unlike Blakeâs, who in Girly Door (1959), undertook to familiarise the spectator with the intimate, domestic scale experience of the âsincere fanâ and pin-up collector.