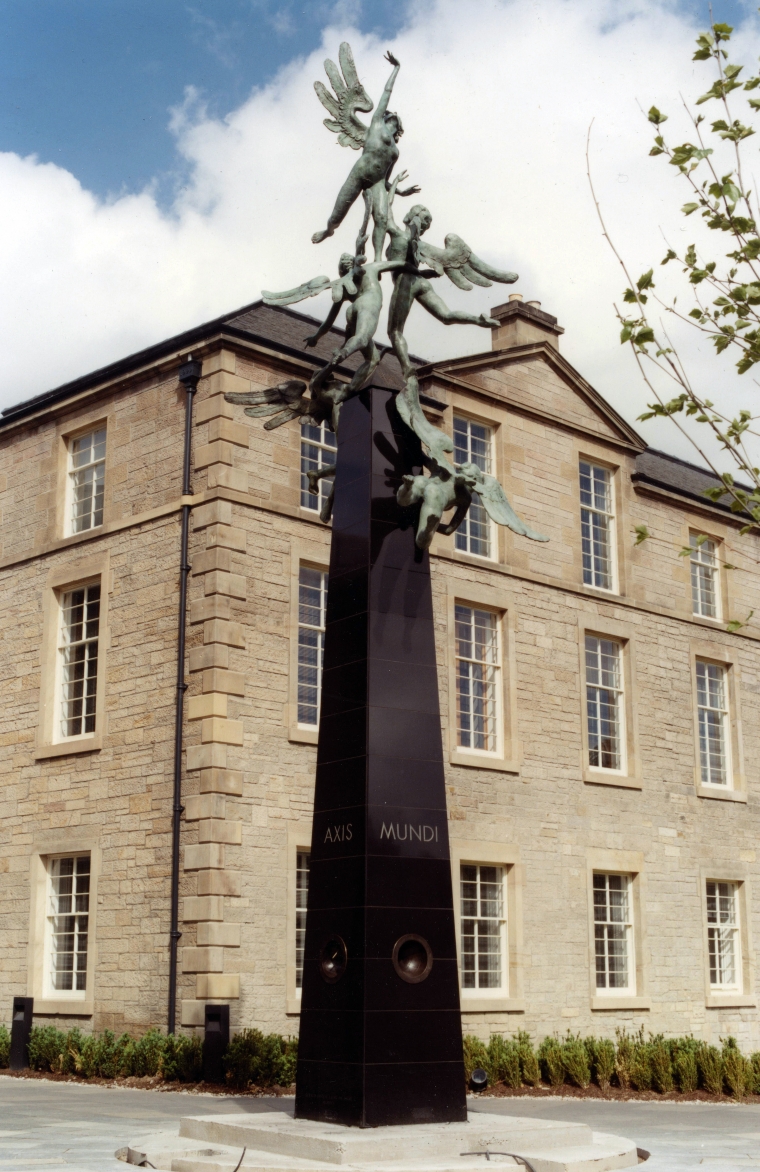 The work of art which probably exerted most influence on me at this time [1959] was one whose effect I did not recognise for many years. It is the First World War memorial in the Haymarket [Newcastle upon Tyne], a stone obelisk with the dark bronze figure of an angel reaching upwards toward its tip. In her hand she used to hold a palm frond, but this has now disappeared, no doubt broken off by vandals. Many years later I made a sculpture entitled Axis Mundi and it was only after I had completed it that I realised the debt for its inspiration which I owe to the work of Thomas Macklin.

Axis Mundi is sited in front of Tanfield House, Edinburgh. It consists of a 20’ high polished black granite obelisk, on top of which a group of five bronze winged figures, each 1.25 times lifesize, are positioned. The overall height of the sculpture is 30 feet. The figure group weighs 1750 lbs, but is composed and engineered to give the impression that each figure is flying and ascending. On the faces of the bronze pyramid which forms the cap of the obelisk are cast the letters of the palindrome. At a height of about 12â above the ground the words Axis Mundi are carved into the sides of the obelisk. At eye level on the South, East and West sides are bronze bowl-shaped sundials which show the hours of the day, the equinoxes, and the twelve astrological signs.
Axis Mundi should be understood as a sequel to my Frieze of the Wise and Foolish Virgins which was installed on the facade of no.3 George Street in 1980. In the Frieze of the Wise and Foolish Virgins the Foolish Virgins are shown distracted and dissipated by their various imperfections, while the Wise Virgins are shown in a perfect unison of religious conviction as they proceed towards the Palindrome, which is a metaphor for God. In Axis Mundi the Foolish Virgins have disappeared, and the Wise Virgins are shown actually ascending. Axis Mundi is a religious and philosophical concept, related to the Tree of Life which signifies ‘the unfolding of form in a physical sense, development, growth from below upwards…death and rebirth.’ (Jung), or ‘the World Tree, the philosophical tree, the tree of Christâs Cross, the Bo-tree of Buddhahood - and the wounded Fisher King, whose fishline from the Great Above to the Great Below is equally the Axis Mundi; awaiting everywhere, with its baited hook in the water of this world, to haul us up to the lotus boat of the radiant Fisher of Men…’ (Joseph Campbell).

Gerald Laing, 'Axis Mundi of The Apotheosis of The Wise Virgins', unpublished manuscript, 1991