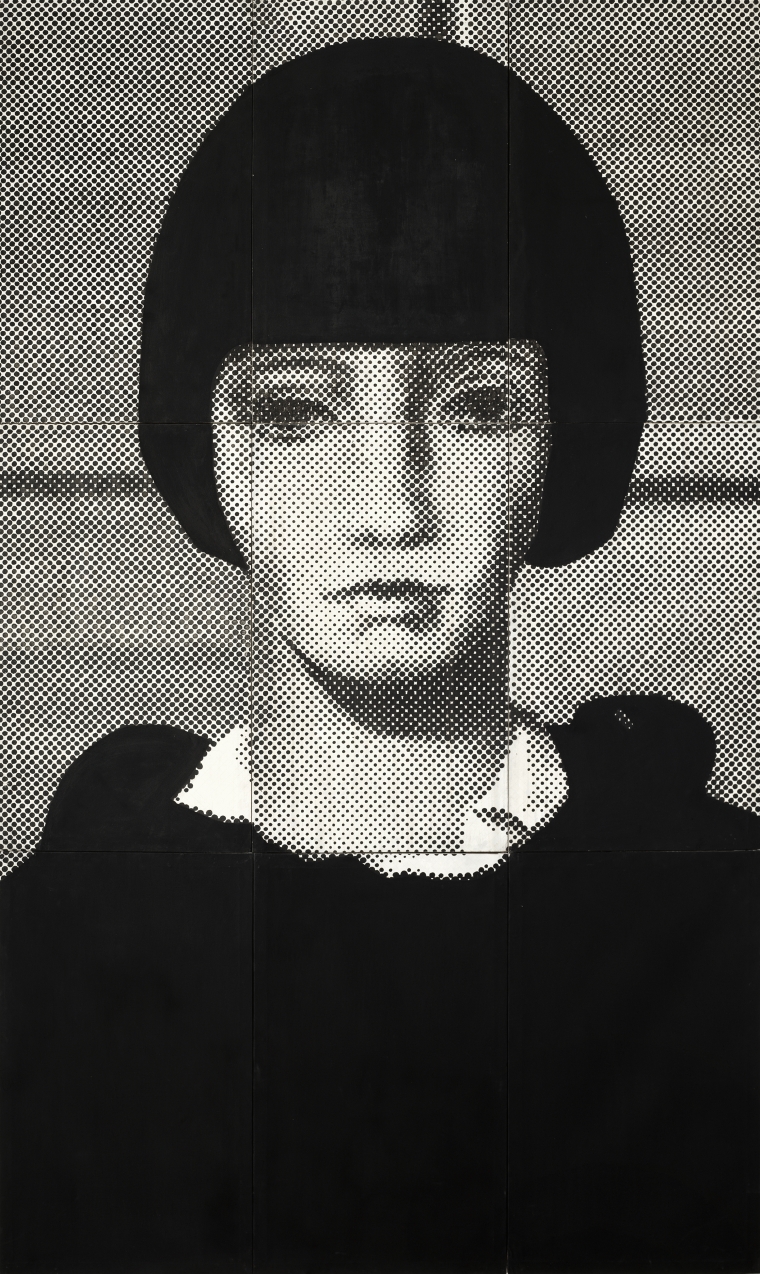 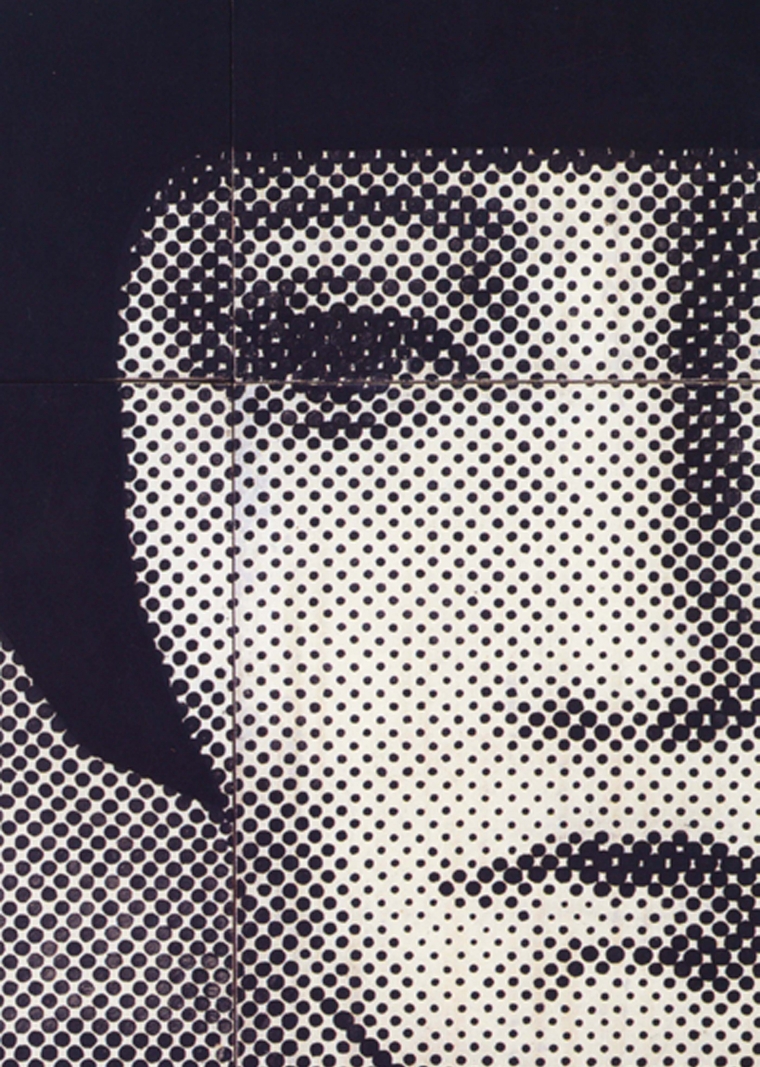 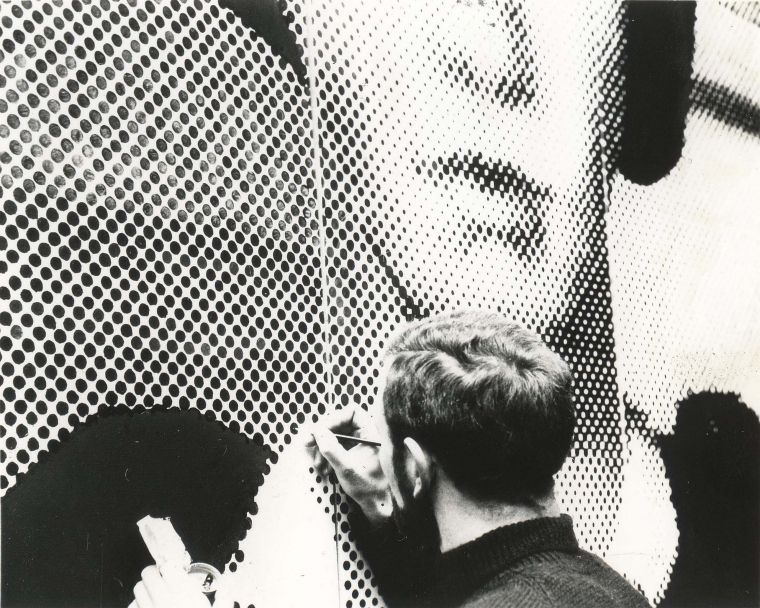 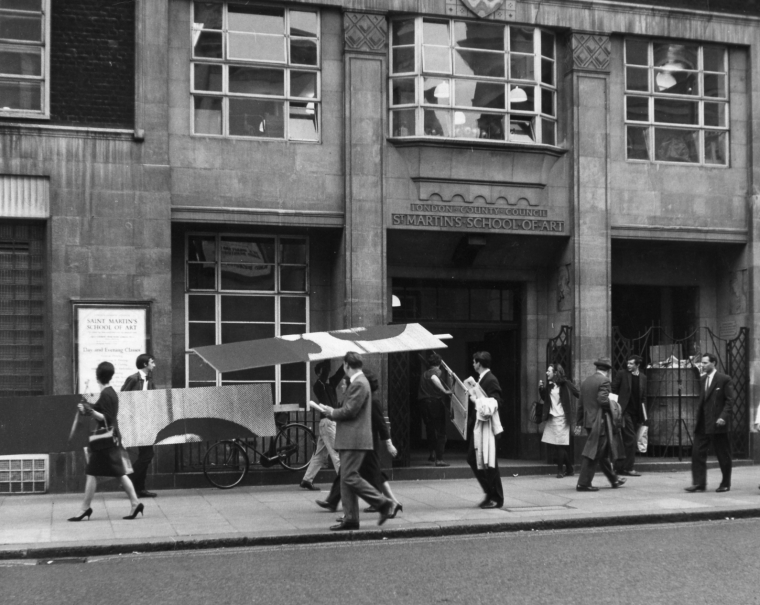 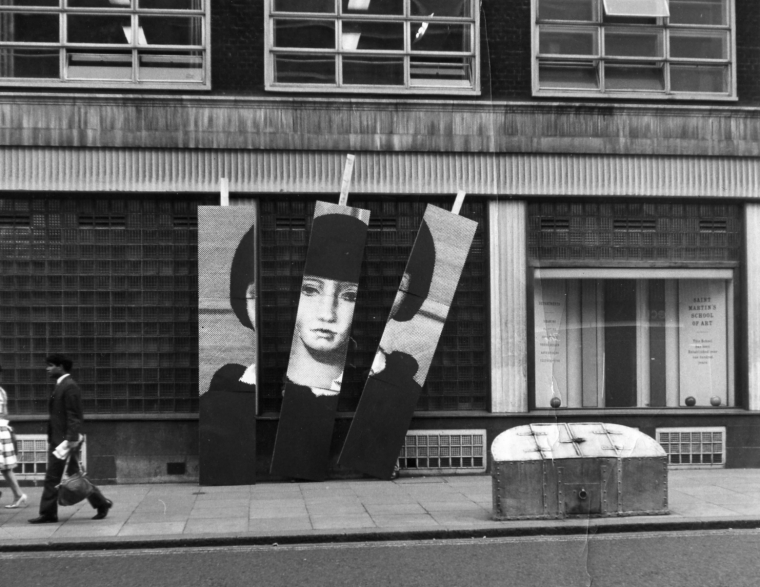 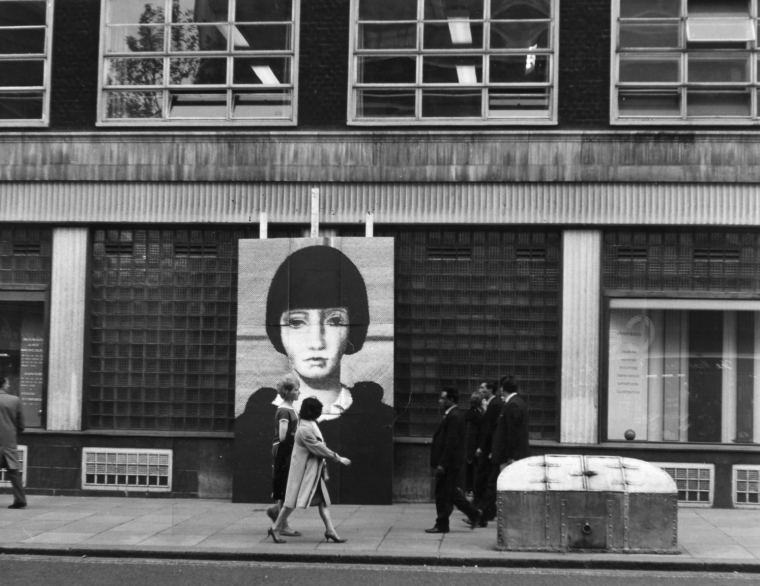 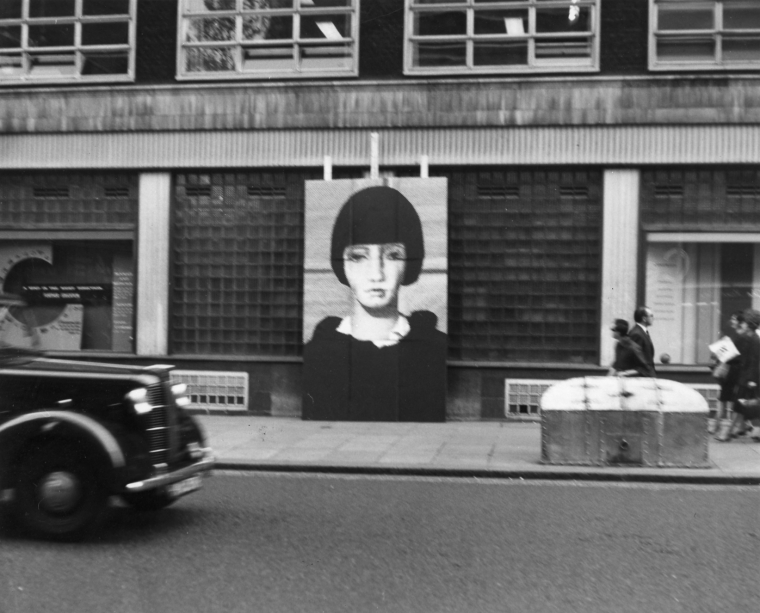 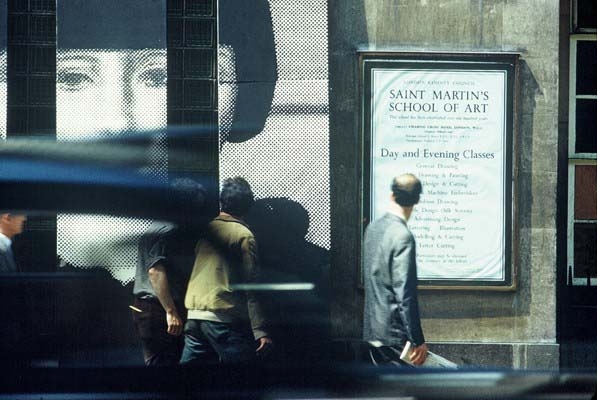 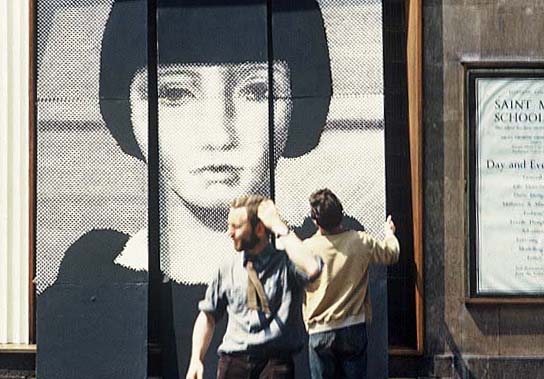 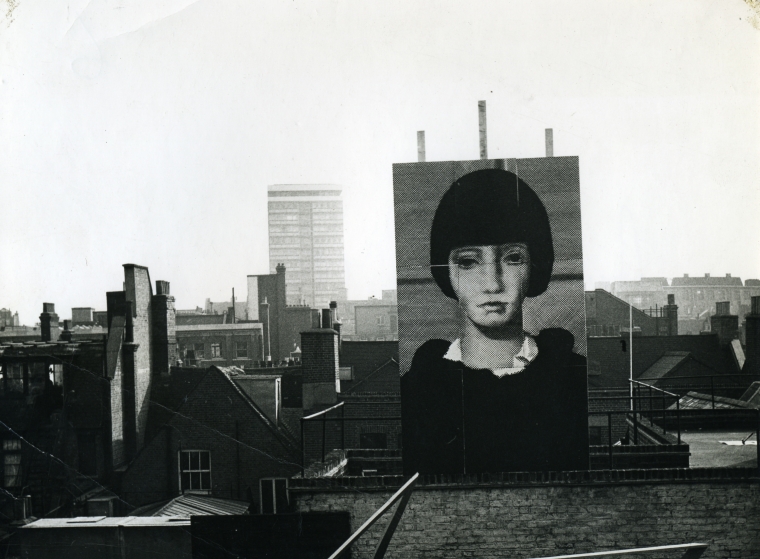 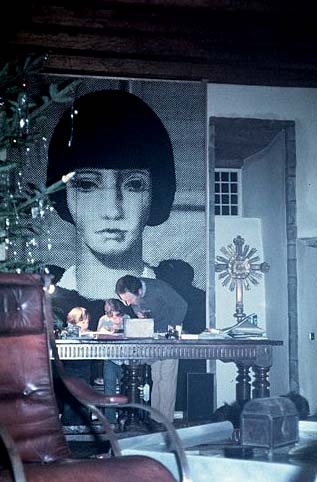 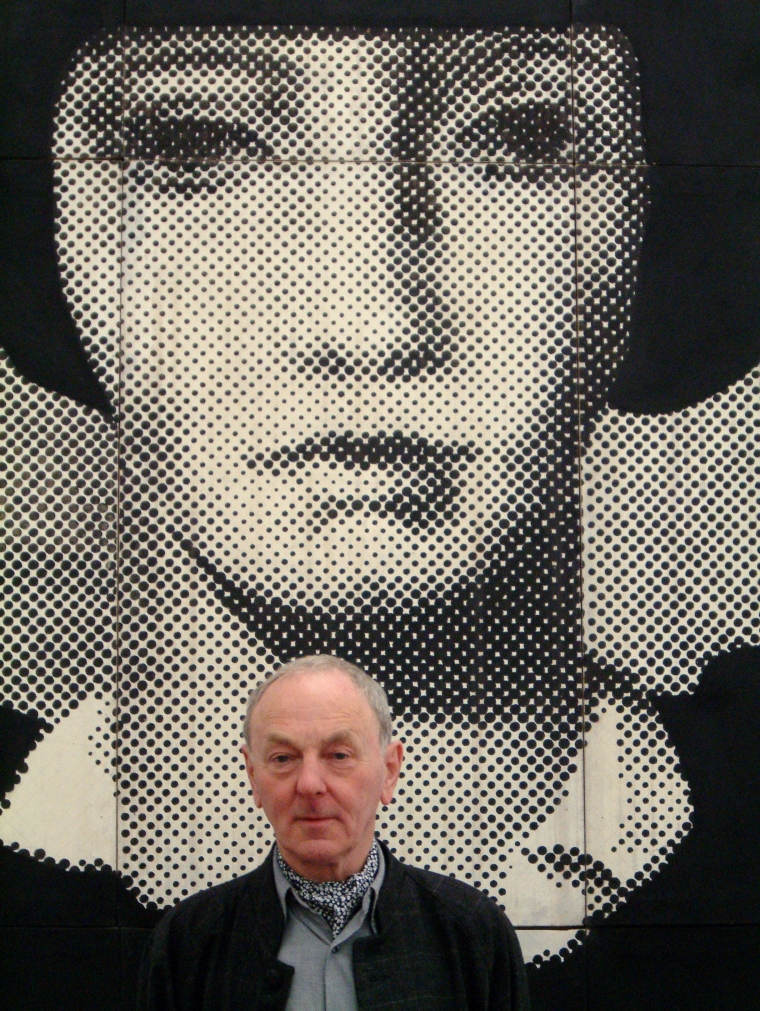 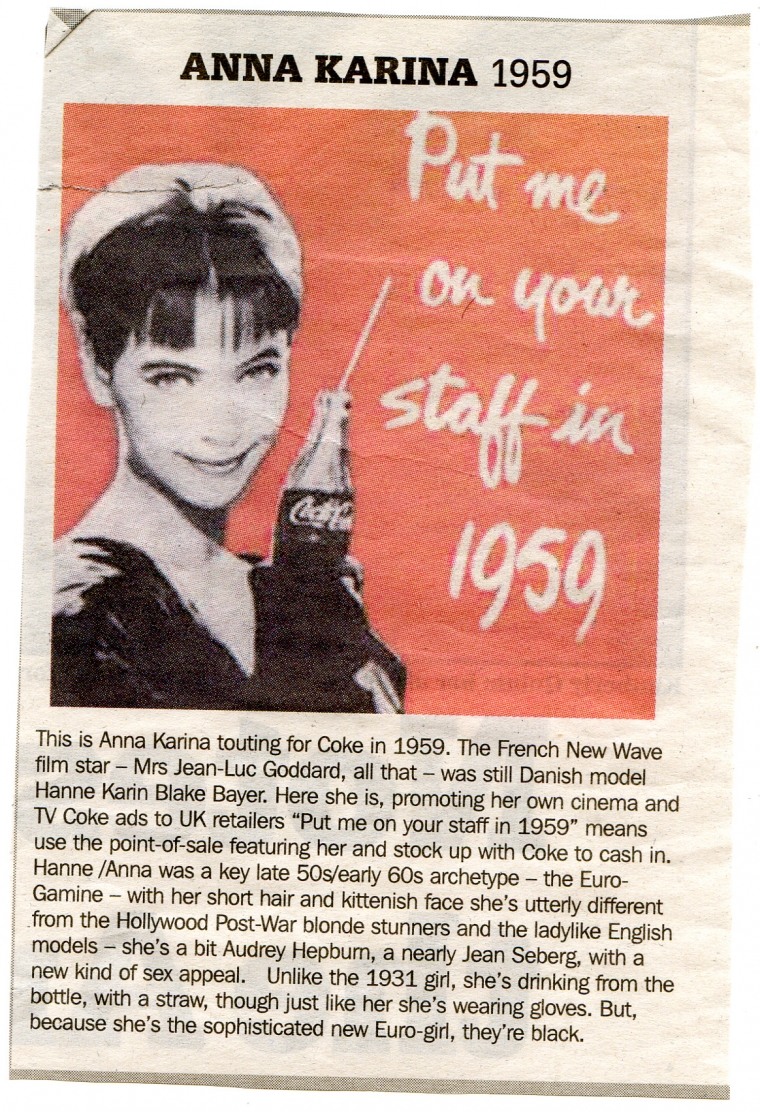 This painting was based on a newspaper photograph of the head of French film star Anna Karina in the leading role of a film entitled Vivre sa Vi. I began it for the following reasons:- 1) The idea of enlarging and making permanent a small obscure newspaper advertisement which would normally have a ‘butterfly existence’ of one day. 2) The actress in this role appealed to me personally. 3) The almost-mechanical near-symmetry seemed appropriate to the modular interpretation with which I was then involved. 4) I wanted to make a really large head, partly to see if I could manage it technically and partly because, at that time, there was a lot of involvement generally among my contemporaries with the implications of large size.

The painting, which measures 7â x 12â, is in 9 sections, each 2â4â x 4â. It is one of the few with the darkest-toned areas painted flat black instead of being constructed from a mass of adjacent large dots. This gives it a weight which might have become turgidity in a smaller canvas, but probably foreshadows later use of flat colour. Anna Karina figured as the ‘heroine’ in a film I made in 1963. The film set out to explore the following possibilities:- 1) The difference between mass-imagery and the mass-image which has been turned into art. To this end the painting was placed in situations normally occupied by mass-imagery (advertising) - e.g. Among billboards, on the street, reflected in shop windows, etc. 2) Possibility of subliminal interference with a painting on film. This and other paintings of girls were used - lone or two frames of a real girl approximating to the image in the paintings, standing in front of the paintings, would be interspersed with straight footage go the painting. 3) Surrealistic possibilities - round paintings as car-wheels, paintings of mouths appearing to devour cakes in shop windows when reflected in the glass, etc. 4) Associative possibilities - e.g. cut from painting of girl on swing (Cleo) to shot of real girl on swing. 5) Painting as inert heroine or ‘movable icon’. Re-arrangement and ‘growing’ (through accumulation) of the nine sections was also explored.

Choosing a group of French female New Wave film stars - Anna Karina, Corinne Marchand and Annette Stroyberg, (as well as the standby pop pin-up of French film, Brigitte Bardot) - Laing took the photographic screening process that reproduced their faces and fame for publications, and then produced over sized images of them in paint. This technique was entirely independent of Roy Lichtensteinâs use of graphic âBen Dayâ dots and his universe of comic books: it atomised the photographic referent, blowing it up, in the case of Jean-Luc Godardâs star, Anna Karina, to twelve feet high; an echo of Richard Smithâs then current rehandlings of hoarding sized scale.

This immense brooding portrait of the French nouvelle vague film actress Anna Karina, staring out mournfully in stark black and white, was the star attraction of the exhibition Gerald Laing held at St Martinâs School of Art, London, where he was a student, in March 1963. The title he devised for that show, Paintings from Photographs/Photographs from Paintings, directed attention to the photographic imagery and quasi-mechanical procedures that proved symptomatic of his particular contribution to Pop Art. Demonstrating a quick understanding of the possibilities suggested by the work of the American Pop artists, only then beginning to be seen in England, he took up implications both from Andy Warholâs photo-screenprinted portraits of movie stars and from Roy Lichtensteinâs deployment of hand-painted or stencilled dots imitating the look of the half-tone screens used in the printing of mass-circulation newspapers. While Warhol favoured the Hollywood movie industry and such stars as Elizabeth Taylor and the recently deceased Marilyn Monroe, Laing focused instead on European sources and particularly on the actresses seen in the more artistic and intellectual productions of the French cinema; where Lichtenstein use âBen-Dayâ dots painted in the âprocessâ colours of four-colour offset lithographic printing (cyan blue, magenta, yellow and black) for his reconfigured enlargements of comic-strip frames, Laing preferred to restrict himself to the black of single-colour printing habitually used for the photographic images that he took as his sources. By varying the size of the circular applications of paint, as in the tiny newspaper cutting from which he took Karinaâs image, Laing created an optically dazzling pattern of light and shade, giving the figure an illusion of material weight and volume while ensuring that every constituent element of the image remain part of the same flat surface. Shown here in her role as a prostitute in Jean-Luc Godardâs 1962 film Vivre sa vie, Karina gazes ahead with a blank or doleful expression, as aloof and utterly remote as a goddess painted on the walls of an ancient Egyptian tomb. The vast billboard scale makes her powerfully present, as on the cinema screen itself, but also serves to withhold the promise of intimacy. Frozen in time, literally screened from our view, she is destined to remain forever a tantalising but inaccessible mirage.

Anna Karina was painted in 1963 while I was still at St Martins. It is painted on nine separate stretchers. The paint is applied with a brush on the intersections of ruled pencil lines in order to emulate the appearance of a half-tone printed image. In the strictest sense, my paintings of this period, which include Anna Karina, are paintings of photographs rather than paintings of reality. The inspiration was a 3 cm high advertisement which appeared in the London newspapers at that time were advertising Jean Luc Goddard’s new Film, Vivre Sa Vie, in which the lead role was played by his wife Anna Karina. The film is in a documentary style and recounts the destruction of a young woman whose ambition it is to become a movie actress. The still photograph from the film from which my painting is derived is from the section describing her descent into prostitution. The glazing bars of the window behind her head form a cross and the whole image has an almost religious iconic status which I am sure was intended by Godard and was certainly my intention. In the film, her name is Nana, which is both the title of Emil Zola’s great novel on the same subject, and the name of his protagonist (though Zola’s Nana fares far better than Goddard’s). I wanted to monumentalise and immortalise a fragile and ephemeral newspaper image of a film and an actress which I felt captured an urban mythology of the times.

In 1963, early in the Pop Movement, one widely held notion was that in contemporary society we are more used to the reproduced image than we are to reality. Whether or not this is true, it certainly relates to some of the ideas of Marshall Mcluhan which were popular at the time. This painting is literally a painting of a photograph. It is executed in the most practical way I could devise to produce a painting of a half-tone photograph; that is, by painting dots of various sizes onto a ruled grid. It is essentially a tonal drawing; my concern with simplicity and clarity of intention worked well in this context.

The source for this “icon” was a 114” high newspaper photograph of the French actress Anna Karina in the role of the prostitute in Jean-Luc Godard’s film “Vivre sa Vie”.

This painting of Anna Karina was taken from a newspaper photograph about 1.5” high. I should stress that I did not paint the photographs dot for dot; they are paintings of black and white images, not blow-ups.