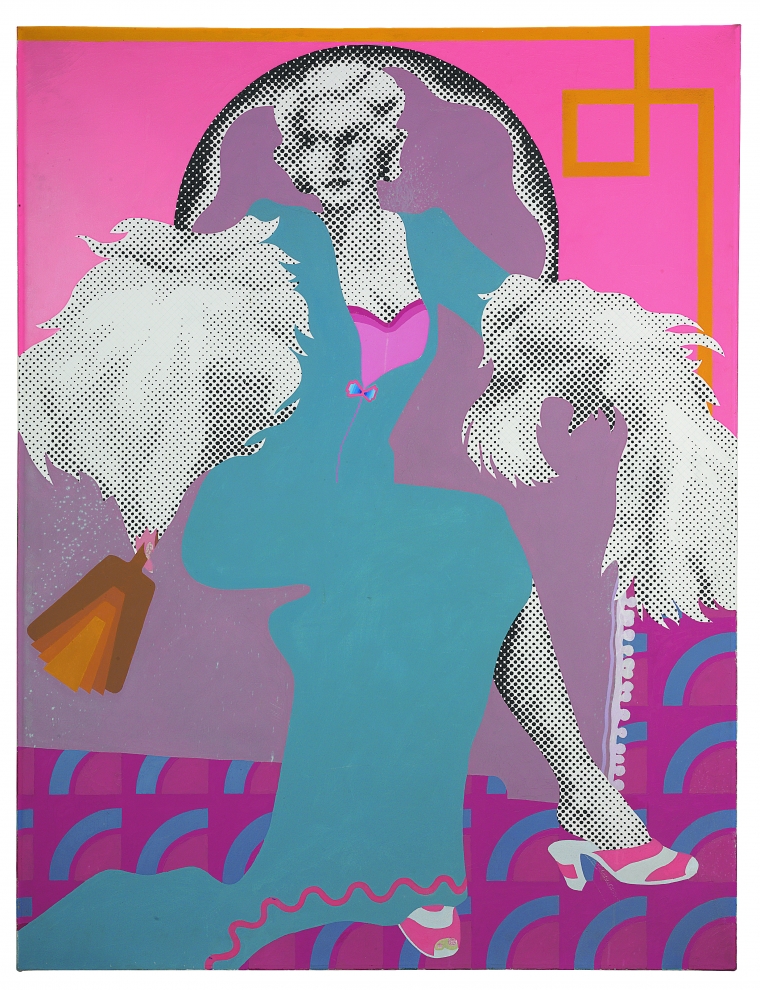 A Friend of My Mother’s

Her clothes and the decoration reminiscent of the 1930’s Odeon style are in strong colour and hard outline because these are the standard images and the common language of sign; the black and white dots are used for the feather boa and her face, the former too complex and full of movement to be grasped by the memory, the latter because it is too individual. Her personality is an enigma, one which Laing chooses not to investigate. It is interesting to note that this same ambiguity appears in the paintings of many artists working in the States at that time; one thinks of Warhol’s bland images of death which appear both to condemn and accept that ambiguous subject matter. Laing is not simply criticising the depersonalisation of his subject - masks and costume obviously excite him and it may be that he does not ascribe to the individual personality the importance usually given to it. A Friend of My Mother’s also serves to show the skill of the painter, although it is mostly hidden behind the bland front of the picture. To suggest the feathery softness of a boa cannot be easy by any method; to do it entirely in dots could be virtuosity bordering upon perversity if the treatment did not thoroughly justify it. The colour too seemingly arbitrary, exactly captures the mood not of the thirties but of the thirties remembered.

This opulent and luscious portrait of Jean Harlow was completed in 1971, in a return to Laing’s early style, though conceived at the same time and from the same sequence from George Cukor’s 1933 film Dinner at Eight as the 1964 work bearing the actress’s name. Like the first work, it presents the platinum blonde insouciantly seated with billowing sleeves draped around her like the copious feathers of some exotic bird. It parades a hot palette of reds, pinks, oranges and blues quite unlike that of any American Pop artist of the time. Laing’s previous film-star portraits had referenced newspaper photographs and were consequently monochromatic; now, living in New York, he had access to a much broader range of mass-media imagery, and he began using Life magazine and other such publications noted for their sumptuous colour. Laing almost certainly worked here, however, from a black-and-white still or promotional photograph, as the movie itself was in black and white, and was therefore left to his own devices to invent the colour. Harlow’s face and flesh remain monochromatic.
Though Harlow was one of the first major stars of the Hollywood cinema, having made the transition from silent films to talkies, she harks back to an earlier era, bathed in nostalgia, and in so doing speaks of a distance from the contemporary American movie industry as pronounced as that of any vedette of European films. As with Marilyn, her memory is bathed in the tragedy of an unconscionably early death. She is seen as doubly, or even triply, inaccessible, a harbinger of modern superstardom from another age: painted from a photographic reproduction of her playing a role, brought to life from an image produced through the camera decades earlier. She hides behind sartorial choices that function like the attributes of a saint, but as signs of her status and glamour, her own mask-like face studiedly refusing to reveal the emotions of a real person behind all the play-acting. The coded formal language itself acts surreptitiously on one’s senses, the extravagant undulating shapes of the blue dress conveying Harlow’s seductive curvaceousness as surely as the heightened colour scheme transmits the heat of her erotic appeal.
The title of the painting is teasing and tantalising. Could Laing’s mother really have been a friend of this megastar? Or was she simply of a similar vintage and type? Harlow died just 16 months after Laing was born. She would have been the right age to have been his young mother. Perhaps this helps account for the tenderness infusing a portrait otherwise characterised by a certain hauteur and distant beauty.