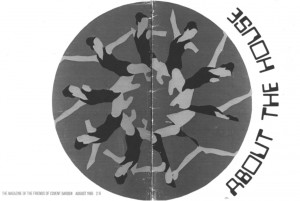 Cover for 'About the House' Magazine, August 1965

Teaching in Oxford.
A trip to Paris.
A telegram from New York.

In spite of all my activities, money remained desperately short.  Derek Southall, who had so busily occupied the room next to mine at Sparsholt Road, was now head of the Painting Department at the Technical College in Oxford.  I was relieved and very grateful when he arranged for me to teach there for two days a week.  The fact that I was myself still a student, and the anomaly that I would be teaching people who were studying for precisely the same examination (National Diploma of Design) in the same final year as I, was concealed from the Principal and the other members of staff.  My comparatively advanced age assisted in this deception, and my confidence and enthusiasm resulted in greatly improved results in the examination that summer, so in the end there was no need for me to suffer any qualms of conscience.

Nevertheless, the tensions of my new and precarious life, invaded as it was by strange responsibilities at home and gross insecurities without, finally took its toll and, as I was plugging in the cable of the slide projector in order to give my introductory talk at Oxford, my back went out and I suffered excruciating and almost paralysing pain.  I gave my talk in spite of this and on the way home (I could neither sit nor stand nor lie down without dreadful agony) I could endure the train journey only by lying half on and half off the seat, with its forward edge pressed into the small of my back.  It was an incongruous and somewhat suggestive position but the pain was so intense that I did not care. At night I could sleep only on the floor with a tightly rolled towel under my lower back.  I kept on going to school and teaching at Oxford in a state of agony.

The doctors and specialists I saw were as usual more or less powerless to help; painkillers were not a serious option and immobilisation, which one of them prescribe, was impossible; I could not stop working - we were teetering on the edge of survival as it was so I developed various strategies to deal with the disability, the most successful of which was riding an old 1930s rigid frame Velocette motorcycle which I had just refurbished; the combination of vigorous jarring by the harsh suspension and the curved posture I adopted when seated on it seemed to give my back some relief.  This, I am sure, would have surprised the doctors had they known about it.  I began riding to Oxford to my teaching job in all weathers, finding relief from the pain, which eventually I learned to accommodate and which gradually subsided as my back adapted to the trauma.  Since then it has been chronic, more or less bearable most of the time but likely to flare up occasionally and without warning.  I am used to it and know from experience how to manage its effects.

At the art school in Oxford they had one of the first and earliest types of Xerox copying machine, which printed by using a very fine graphite powder which was adhered to the page by a combination of magnetism and heat.  It was a comparatively slow and clumsy process, but it interested me because I was looking for a means of graphic reproduction which was not a traditional one.  I rejected etching, lithography and silkscreen printing as being reactionary, and actively sought an alternative.  A series of photographs of tools used space had been published - tools designed to work in a weightless environment where there is no force of inertia available. I wanted to make a series of prints and drawings based on these images.  In addition, I was beginning my quest for a truly metallic silver surface to use in graphics and painting.  Coated plastics such as those now readily available had not been invented; all I could find was silver paint and if it was brushed on it looked more or less grey, not metallic; and when sprayed on it was equally disappointing, and if applied to canvas it made the hairs stand up in a spiky way.  The only readily available truly metallic material was aluminium cooking foil.

I experimented with this and soon found that I could get images onto it by using the school Xerox machines.  I produced a series of monotypes this way, augmenting the image with spray colours applied through stencils.  The aluminium foil was very vulnerable to crumpling and creasing and consequently very few of these images have survived.

Teaching in Oxford meant that I missed two days at St Martin’s each week but, since I was really treating it as studio space and working at all hours at home as well, this did not seem important.  Teaching made me to marshall my ideas in order to express them to my students and this was useful.  My main message was that they should paint subjects which meant something to them in real life - subjects in which they were interested or which moved them rather than either the arbitrary still life set-ups which were then common in art schools, or abstractions in which my sense of purpose could so easily be lost.  I also encouraged them to paint in a direct and reconstructive way; by that I meant them to recreate the subject and so possess it.  This gave most of them motivation which they had not up until then experienced; the vague wallowing ceased, the sails filled, and the ships of their imagination gained steerage way.

Small increments in my career continued to occur.  I was befriended by Mario Amaya, a flamboyant American who was then art critic for the Financial Times and who was among the first critics to write about young British artists in America.  As editor of About the House, the Friends of Covent Garden magazine, he commissioned me to design a cover for that publication, which finally appeared on the issue for August 1965.  I made for it a composition based on optical toys, which implied a dancer in motion.  The title of the magazine was printed in what I called Computer lettering, a typeface which I had to design myself.

Mario, who proudly declared that his mother had been married wearing pink mink, was later to write âPop as Artâ, the very first and definitive book on the Pop art movement, which was published in 1965.

At Easter, Jenifer and I left the baby with my mother and rode to Paris on the old Velocette motorcycle.  Near Beauvais a group of workmen standing in the road waved wildly at us; around the next corner, I discovered why as we slid violently and completely out of control across the narrow road on a deep loose surface of large gravel lumps, the preliminary layer of a new road surface.  Only by slamming my feet hard into the yielding mass was I able to prevent a sudden and painful interruption of our journey.

In Paris, we stayed with the American sculptor who had found me my New York lodging.  He had a purpose-built but tiny studio on the left bank, one of a group dating from the late 19th century.  There was barely enough room for us to lay out our sleeping bag on the concrete floor.  We visited various other artists whom he knew, portentous figures involved in an idea of art; that is, continuing a tradition of modernism which had perhaps forgotten the reason for its inception.  Their work tended to be either a muddy abstraction (painting) or a welded assembly of found objects (sculpture). They supported each other by a jointly held belief in the validity of their activity, but the fire had gone out and the relevance had been lost.  I compared it with what I knew of London and had seen in New York.

It was easy to see that the centre of gravity of the art world no longer resided in Paris; equally, there was little doubt that these artists, who saw themselves as the legitimate heirs of the great events of the past, took themselves, their work and each other quite seriously.  âMoi, je change toujoursâ, one of them said repeatedly; yet I could not see that the changes he claimed in his work were in any way significant.

The most interesting experience for me, however, was a truly educational one; for I met a group of young Spanish university students who could not return to Spain because of their political views.  I could not visualise such a thing, and found it hard to believe that these innocuous middleclass young people were considered such a threat by their government that they had been forced into exile.

My belief was that any idea could be absorbed by a healthy system; that people themselves, ultimately reasonable in their desires and benign in their intentions, would embrace and smother anything which seriously threatened stability and the common good.  Yet here I found young people whose articulated thoughts had cast them into exile.  My naÃ¯ve and complacent attitude was typical of that time in Britain; though complacent, it was in fact true.

Back in London for my final term at St Martin’s, the possibilities for the future seemed vague and meagre.  I put my name down for a teacher’s training course in order to delay the moment of entry into the outside world, in which I would be forced to grapple seriously with a future which seemed blank.  I did not expect to be able to live by my work; the simplest mathematics made that seem far too ambitious an idea.  I had plenty of completed paintings - but who on earth would buy them in sufficient numbers to enable me to support myself and wife and child?

Then, with the end of term in clear view, I received a telegram from New York.  It read:

RICHARD FEIGEN GALLERY NEW YORK
HAVE SEEN YOUR PAINTINGS AT BOB INDIANA’S LOFT. LOVE THEM AND WANT TO SHOW THEM IN MY NEW GALLERY HERE.
WHAT ARE THE PRICES? WILL BE IN LONDON NEXT WEEK AND I WILL CONTACT YOU THEN.
REGARDS
RICHARD L FEIGEN

I ran up and down Fournier Street in the middle of the road, whooping and yelling and repeatedly throwing the precious document into the air and catching it as it fluttered slowly back down towards me.