Systematic, monumental, disciplined: but also caught up with the instability of the world, the flickering of time and sight and presence. These opposing positions, these two separate metaphysics, have occupied Gerald Laing throughout his career as an artist. He has addressed historical example from the outset and not just latterly. This was implied, for example, at the very beginning of his career, when he told Mario Amaya, then writing the first survey of pop painting in 1965, that his major influence was Paolo Uccello. Here he indicated an orientation towards the body systematised in action, styled in fashionable dress, at once heraldic and modern. It was Baudelaire who had stipulated in the 1850s that modernity would be framed by uniforms, glamour and leisure iconography; he prophesied that profane edge to modernism which was constantly disavowed, but which forms such a distinctive element in Laing’s productions. It may be that Laing’s perception of the heroism of modern life stems from the conceptual horizons of a certain masculinity which was unchallenged in the 1950s, but which has fallen under siege since about 1969. His position within such an economy of meaning was contradictory. It was rooted in the culture of ‘the angry young man’ (he saw the original production of Look Back in Anger while still a soldier), while simultaneously in a fascination within ballet’s management of the body.

The contemporary human body was being redefined by the technologies of politics, space exploration and leisure in the late fifties and early sixties. This was Laing’s moment of entry into the art world and, given this cultural environment he endeavoured to create a system which would enable him to trace - as Uccello had done using single-point perspective in the early fifteenth century - the dramas of public life and civic identity, newly clothed and in the postures of the moment. Laing’s ‘Souvenir of the Cuban Missile Crisis’ (1962), painted at St Martin’s School of Art, tricks the viewer’s eye to read either Kennedy’s or Kruschev’s portrait depending upon whether they are situated to the left or right of the work, thus suggesting an allegory of political ‘perspective’. Viewed from the centre, the picture reads as a pattern of vertical flickers and optical interference - a device which later in his career would resolve into the banalities of desire in another optical experiment, ‘Love Machine’ (1965) which can be compared to the work of US pop artist Robert Indiana.

But, earlier than this, in the harsh winter of 1962-63, Laing pioneered a grid of representation that engaged more directly with the mass media. He mimicked and enlarged the screened dot systems of halftone photo-press images found in newspapers and magazines in an oil-paint format. This crucial innovation was independent of Warhol’s movement into silk-screened images as well as Roy Lichtenstein’s annexation of the ‘Ben Day’ graphic process, and Sigmar Polke’s later giantist half-tone images. (The ultimate precedent perhaps lay in the photo-realist canvases of Sickert between the end of the twenties and his death in 1942.) Laing’s interest in fixing the spectator’s body proximate to an image which was at the point of its own dissolution (atomised in the halftone screens) was partly derived from his student fondness for going up too close, beyond a comfortable viewing distance, to the photo-advertisements on the walls of the London underground. (A parallel might be made here with Rosenquist’s enforced myopia when painting advertisements.) What may have further focused Laing’s exploration of modernised photo -mechanical vision as a resource for painting was the teaching of Richard Smith in the Painting School at St Martin’s. Recently back from New York, Smith offered the prospect of mapping the simulated world of promotional selling and publicity in his ICA lectures and film screenings in the autumn of 1962. This anticipation of deconstructive formal strategies which dismantled the devices of the media spectacle was supplemented by the graphic caricaturism and figuration of the younger Royal College of Art pop painters who had graduated that previous summer. These artists which Smith applauded included Derek Boshier, David Hockney and Peter Phillips (who later collaborated with Laing in New York).

The first fruits of Laing’s stylistic revolution were evident in the exhibition which he held at St Martin’s in March 1963 called ‘Paintings from Photographs / Photographs from Paintings’ - a show whose significance can now be fully recognised. Laing assembled an array of French nouvelle vague film actresses, as well as Brigitte Bardot, to represent peculiarly removed stars, objects of desire to whom access would be forever barred by photo-mechanical distance. Presciently, he reserved Godard’s fascinating, head-on sphinx, Anna Karina, for his biggest, twelve foot high essay in this advertising-hoarding format. In the light of his later public sculptures such as ‘Sherlock Holmes - The Conan Doyle Memorial’ (1991), it is probably important to note that Laing made a film documenting the activities of himself and his colleagues taking ‘Anna Karina’ onto various locations in the Charing Cross Road and watching its effect on passers-by as a piece of temporary street sculpture. 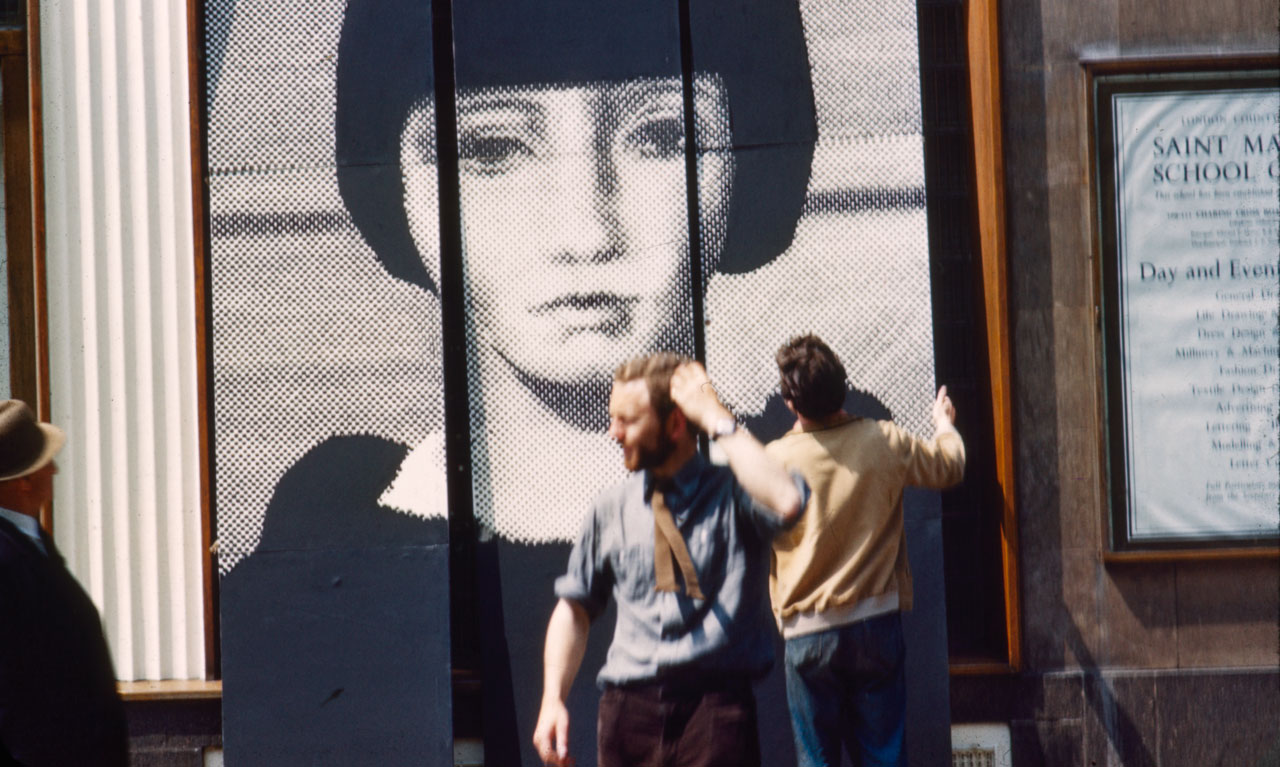 A still from the 1963 film of Anna Karinain Charing Cross Road.