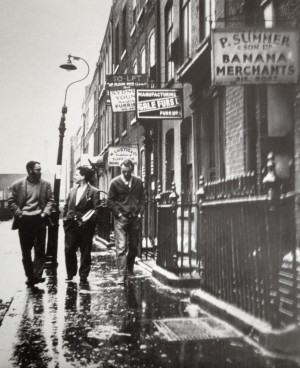 Gerald Laing and I first met when we were both at crucial stages in our lives. I was a National Service second lieutenant with an honours degree in English literature and a passion for jazz. Gerald was a full lieutenant who had gone through Sandhurst with the intention of making the army his career. He was a romantic with a passion for heraldry, but two years of professional soldiering had knocked the stuffing out of his military idealism, and he was beginning to question everything. It was also dawning on him that he had other talents and interests which could perhaps find expression only in some different way of life.

Gerald Laing and I first met when we were both at crucial stages in our lives. I was a National Service second lieutenant with an honours degree in English literature and a passion for jazz. Gerald was a full lieutenant who had gone through Sandhurst with the intention of making the army his career. He was a romantic with a passion for heraldry, but two years of professional soldiering had knocked the stuffing out of his military idealism, and he was beginning to question everything. It was also dawning on him that he had other talents and interests which could perhaps find expression only in some different way of life. He had had little opportunity to meet artists, musicians and writers or anyone who had links with that world and so his inner debate had been going on in a vacuum until my arrival in April 1957 when I joined the First Battalion of the Royal Northumberland Fusiliers in Belfast.

He had a lot of charm and cut a dashing figure, but his disillusion had given him a wit as acerbic as that of any Elizabethan malcontent. He seemed to be living at fever pitch with a voracious appetite for experience, knowledge, books and literature, and he was crazy about women. He had acquired a pair of ballet shoes from ballerina Belinda Wright which he kept as a talisman. His early (and suppressed) talent for drawing and painting was beginning to resurface with a potency that would not be denied. He was in a state of crisis which had him perpetually considering what he should do with his life, how to live and what to live for. I saw at once that this was not some self-dramatising parlour game - the dilemma was real and the endless discussions we had were vital to his wellbeing and also to mine.

Little did I realise that this kind of crisis, though perhaps less extreme, would recur at intervals through subsequent decades always in the form of self-posed questions: What ought I to be doing? How should I be living? Of course, Gerald’s deeply ingrained selfquestioning habit is one of the main reasons why his huge body of work is so dynamic. His apparent weaknesses - uncertainty and self-doubt - are his great strengths as an artist. He has never been afraid to tell himself unpalatable truths, to look at himself with a merciless, critical eye, and so his vision has never been clouded by complacency or arrogance. In addition, the never does things by halves; once he is convinced something is right he gives it one hundred per cent commitment. He had given his all to the army until his desire for drawing and painting became imperative after which he devoted all his spare time to these pursuits. He took regular painting lessons in Belfast with Boyd Morrison, an elderly artist who was a friend of Gilbert Spencer (Stanley Spencer’s brother), and who had had some vague connections with Wyndham Lewis and the Bloomsbury Group. Then in October 1957, when the battalion moved to Munster in West Germany, Gerald continued to take regular painting lessons from Herr Brucker, an elderly German artist, and he spent more and more of his precious spare time working at what was clearly becoming the main focus of his life.

In September 1958, 1 was demobilised in Germany and began an indefinite period of ‘bumming around’ Europe. One month later I was staying in Nice in the south of France and, Gerald came to visit on three weeks leave from the army. I found him cheap lodgings in a local peasant’s house, and this may have been his first taste of the bohemian existence. He did a massive amount of painting and drawing during these three weeks and he explored his ideas through continued discussions with our acquaintances. He had arrived like a disoriented lion but ended his stay like a highly focused lamb, as if he had found an inner certainty and become more at peace with himself. By 1960 he had left the army and was studying painting at St Martin’s in London, and I was back in the UK determined to devote myself to trumpet-playing and jazz.

By 1963 we were both living in London’s East End - he was at 12 Fournier Street and I was at number 9. With Gerald’s old school friend, the architect Terry Stewart, we collaborated on ‘Travail d’équipe? for the 1963 Paris Biennale, jointly deciding on the grandiose theme of ‘Birth, Life and Death’. Gerald and Terry constructed the maquette which had a blatantly uterine inspiration, while 1, with bassist Jeff Clyne and drummer Laurie Morgan, created a suitably anguished musical accompaniment for each of the three phases. The taped music and the maquette were taken to Paris by Gerald and Terry who were photographed there with other luminaries including David Hockney and Peter Blake. In 1964, Gerald went to live in the United States where he enjoyed considerable success. He returned to the United Kingdom in 1969 to live in Kinkell Castle which he bought as a ruin and lovingly restored.

By the end of that decade, Gerald had also created a considerable reputation as an abstract sculptor, but during the 1970s, after another of his bouts of selfquestioning, he renounced abstraction and turned with total commitment to representational sculpture - a volte-face that was to become fashionable some ten years later. He had an exhibition at the 1978 Edinburgh Festival, and asked me to compose music for four sculptures (‘Conception’ [19761, ‘American Girl’ [19771, ‘Ecce Domina’ [1977] and ‘The Human Condition’ [19781). My four compositions were put on tape and played during the exhibition. The collaboration and the sculptures acted as a powerful inspiration and resulted in some of my finest music which was released in 1979 on an LP entitled ‘Out of the Long Dark’ - the title of my composition for the sculpture Gerald called ‘Conception’. Collaborations of sorts and our dialogues about life and work have gone on through the decades and still continue today.

Perhaps the most striking thing about Gerald Laing is the humanity which informs everything he does - the human condition is his concern and inspiration. This lies behind his wide reading and knowledge, his love of music, his concern about how to live, and his sheer integrity as an artist. His visual sense and his conception of life and art are all-embracing -inclusive rather than exclusive - which is why Kinkell Castle has become such a benign living environment. It was created by a man who responds to people, the human form, landscape, architecture and design. He involves a whole spectrum of experience in his vision: from ancient history to modem machinery; from old masters to cars and motorcycles - all are icons in his eyes, emblematic of the mark of humankind. His vast body of work is a trail blazed by a pluralistic but single-minded odyssey.