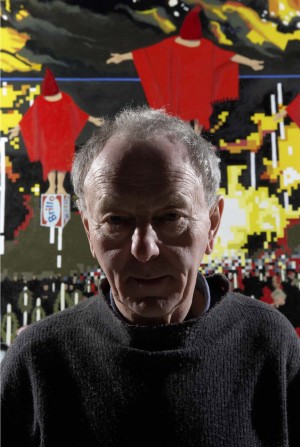 A summary of Gerald Laing’s career, work and available prints by Olivia Connelly of ocontemporary gallery.

As one of the original wave of Pop artists Gerald Laing produced some of the most significant works of the British Pop movement, and today continues to hold his rightful place as one of the most important artists of his generation. Laing first came to prominence in London in the early 60s, where he pioneered the painting of enormous canvases based on newspaper photographs of models, astronauts and film stars. His 1962 portrait of Brigitte Bardot is considered his most iconic work of the period and regularly features prominently in major Pop museum retrospectives. Its subsequent silkscreen edition, one of several editions of his early works hand-printed and published by the artist in 1968, is highly prized by international collectors.

Never one to shy away from controversial subjects, Laing has always strongly believed in the artist’s responsibility to portray and comment on contemporary events in a way the written word never can. His 1962 painting Souvenir, in response to the Cuban missile crisis, is a perfect example of this quality and remains one of the most original and striking comments on that dreadful and terrifying moment. Painted in a 3D effect so the viewer can see Kruschev from one side and Kennedy from the other, and head-on, a monster composed of their faces combined, the work epitomises Laing’s ability to strike at the heart of his chosen subject matters with a coruscating clarity and wit. Laing first visited New York in 1963, at the end of his first year at St Martins. It was on this occasion that he met his contemporaries, the American Pop artists Andy Warhol, Roy Lichtenstein, Robert Indiana et al. While all of his black and white paintings (such as Brigitte Bardot and Anna Karina) were made before this first visit to the USA, it was there that he began introducing areas of pure colour. It was after his return to the UK that Laing executed one of the most controversial paintings of his career, the Lincoln Convertible, using as his source the famous Zapruder 8mm film images of the Kennedy assassination. This is the only contemporary painting of the event. A silkscreen edition complementing the painting has recently been published.

On his return to New York in 1964 at the end of his time at St Martins, he immediately began exhibiting to great acclaim in New York, Los Angeles and Chicago. His work entered many important private collections as well as museums including the Whitney and MOMA.

Eventually, disillusionment with the American dream after the assassinations of both Kennedys, Martin Luther King, other extreme violence and dislocation, and the ongoing Vietnam War, led Laing to leave New York in 1969 and return to the Highlands of Scotland where he turned his back on painting and concentrated on an incredible body of sculptural work for the next 30 years. Initially exploring abstraction, Laing moved on to some of the most beautiful figurative sculpture of the 20th century with the Galina series, depicting his then-wife and encapsulating his ongoing fascination with female beauty and its dichotomy of power and fragility. Many high profile public commissions during this period included the Twickenham Stadium figures and the bronze bas-relief twin dragons at each of the five exits of the City of London’s Bank station.

When the publication of the Abu Ghraib prison torture photographs began to appear in the press in 2003, Laing, himself a former British army officer, saw that his 60s starlets and all-American heroes had somehow become the perpetrators of horrific war crimes. His career therefore came full circle as yet another controversial and unpopular American-led war prompted him to return to the painting style that he had abandoned at the end of the 60s. The body of work executed by Laing in response to the war in Iraq is one of the most important and incisive commentaries on the subject and and its human and political consequences. Returning to his roots, Laing uses Pop imagery – one of the few who can do so with such legitimacy – to shame the perpetrators of the war crimes at Abu Ghraib, and those of the war itself.

The power of art in times like these is not taken lightly. When Colin Powell delivered a speech imploring the United Nations to renew its mandate to go to war in February 2003 just weeks before the US and Britain went ahead with their invasion of Iraq, the UN covered up its tapestry of Picasso’s Guernica which depicts the first aerial bombardment of civilians in modern warfare. The New York gallery at which Laing’s controversial paintings were exhibited in 2005 employed an armed guard in case of violent opposition to the paintings. In the event, the typical American response to the exhibition was one of gratitude that their own inner feelings had been expressed so clearly and so well. In response to the atrocities in London of 7th July 2005 and Tony Blair’s refusal to acknowledge its links to his Middle Eastern foreign policy, Laing returned for the only time to the 3D method used to such effect with 1962’s Souvenir. From one oblique point of view, Truth or Consequences, which is some three metres long, shows Blair and the twisted wreckage of the blown-apart bus; from the other, Bush and the destruction of Baghdad. Both leaders are walking along the same White House carpet towards the viewer. This painting was exhibited in 2007 by the National Army Museum on the anniversary of the attacks. News of this courageous initiative by the Museum carried all around the world during the week of the exhibition, appearing in such distant publications as the China Post, Taiwan News, Gulf Times, and International Herald Tribune. Both of these important works, Souvenir and Truth Or Consequences, have recently been published as signed sculptural print editions.

As Laing has returned to controversy, so he has returned to the contemporary media images that inspired such enduring images as his 1962 Brigitte Bardot. The Kiss (2007), his painting depicting Amy Winehouse and her husband Blake Fielder-Civil, once again proves his ability to distil the essence of an era to stunning effect. His choice of image and astute use of colour combine once again to create an iconic image with assured place in both popular and art history. His painting hiatus has seen him return to the medium as contemporary as he was when he put down his brush at the end of the 60s. Silkscreen editions have recently been published to complement both The Kiss and his recent paintings of Kate Moss and Victoria Beckham.

Laing currently continues to work on an incredible new body of work for his highly anticipated solo show of new painting at ocontemporary in London in October 2008. He will also have a sculptural retrospective at the Fine Art Society in London February 2008, and a show in Sao Paulo in August 2008. He remains the important and pioneering British artist that he has been throughout his extraordinary career, continuing to contribute immeasurably to our contemporary culture, and interest in his work, both old and new, is enjoying a major and deserved revival.