From Here to Apostasy
Gerald Laing 1999

Gerald Laing in his foundry at Kinkell. 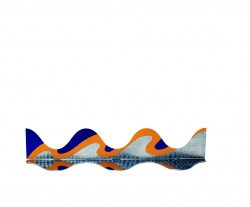 Gerald Laing reflects on the fluctuating fortunes of his career from star of Pop Art to the recidivism of casting bronze figures.

Mine was the first generation of young artists of whom some were lionized immediately after leaving art school. This was a matter of luck, timing and social climate; it had nothing particularly to do with extraordinary talent or skill. Art seemed suddenly to be both profitable and sexy; and therefore it gradually ceased to be an area of interest for a comparatively small proportion of the population. It suited the zeitgeist of the 1960s and was no longer ignored or treated with disdain.

Just as we were the first to receive early adulation and reward, so we were the last to go to art school with no such expectations. Our predecessors never experienced such pumping; a photograph of John Bratby and Derrick Greaves at an opening of the Zwemmer Gallery in the 1950s shows them in corduroys and tweed jackets with leather elbow patches, clutching half pints of beer. This is in marked contrast to an opening of, say, the Saatchi Gallery nowadays, with its black-clad throng of hopeful acolytes resembling nothing so much as the three-eyed toys in Toy Story, hoping against hope that they will be chosen by the Claw which hovers above them - hoping that they can do what has never been done, win what has never been won; meanwhile life goes on all around them. (Apologies to Bob Dylan.)

What each generation forgets - and it is human nature so to do - is that only a tiny proportion will be chosen; and like as not these select few will have careers like a boxer, perhaps glorious but necessarily brief.

My unsuspecting generation suffered this fate. We were not ready for the event. We had the rest of our lives to live, years of work ahead, but we were expected to be fully formed before we were properly out of the womb.

The current state of affairs is very confusing. It seems to be a matter of hysteria. I have sat on art committees myself and watched the group as a whole, endorse work which no individual member of the group would support. I am, albeit reluctantly, forced to conclude that the same number of truly art-literate people exist as in the 1950s and earlier, before commercial techniques were brought so blatantly to the promotion of art. I am certain that a good patron is more rare than a good artist.

Ambition of the type which feeds on contemporary notions of fame is not relevant to the making of art. An artist must have skills; his standards of expertise must at least be comparable with that of a doctor or an engineer or any other professional. And because of the special nature of the creative act, he has to be his own chief critic; he cannot expect significant moral and critical endorsement from anyone, nor can he rely upon their opinion. By choosing to be an artist, he or she has chosen to stand alone.

Whether or not the groups of young artists, including my own, who have been subjected to early promotion have been ready and able to sustain and exploit such advantages throughout the length of an entire career, is debatable. The typical pattern is one of short-lived high-pitched success followed by comparative oblivion. Whether or not this is the case depends ultimately on the staying power of the work in its own right once the props of publicity and promotion have been, inevitably, removed.

Certainly I was not prepared to remain permanently in the mould into which I first was cast, that of Pop artist. I was a core member of the group of British Pop artists, yet I produced work of this type for only 3 years (1962-1965). In 1965 1 began making works which were abstract and cut out of metal, but which referred to the formal elements in my earlier ‘Skydiver’ series of paintings. Several of these were included in the first and defining exhibition of Minimal Art (Primary Structures, Jewish Museum, New York, 1967) - though I did not completely accept the theories of the hard-core Minimalists such as Judd and Flavin. In 1965 1 made a multiple which I called Print in order to propose that such an art object did not necessarily have to be a work on paper. I believe this to have been the first of this type of work which was later to become a popular manifestation. In 1965-6 Peter Phillips and I produced Hybrid which is regarded as the precursor of ‘Process Art’ by people who are interested in such things.

Later, after moving from New York to the North of Scotland in 1969, 1 produced properly volumetric sculpture intended to be placed in a landscape - by ‘landscape’ I meant any real open environment, either urban or rural. This was a contrast to my last New York works, which were highly finished and intended to occupy a pure white space which was otherwise empty and sterile.

I made each change in my work because it seemed at the time the logical, relevant, indeed essential course to take. At the same time a common thread runs through all of it; there are no sudden seismic shifts. The main themes are twofold: formal concerns of line and volume, and literary ones of context and meaning. The relevant proportions of these two ingredients create the major differences between one work and another.
After spending time with writers and engineers and others whose creativity I admired, but who could not, with the best of will, get as much from my work as I could from theirs, I had to face the fact that my system of communication was at fault. I realised that if I was not to be marginalised then I must make fundamental changes. An epiphany occurred when one dawn in 1973, after a long party, I found myself standing contemplating the Royal Artillery Memorial at Hyde Park Comer in London. I realised then that no abstract art could contain a fraction of the love, passion, pain, pride, sorrow, beauty and acceptance that this great work of art effortlessly projects. It is intricate and grand, of its time and timeless, so abstract and formal, so realistic and human, sprung from the great tradition and yet new-born.

At last I understood that the process of creation, the aesthetics of form and composition which give this monument its strength and staying power are the artist’s essential tools. They are the means by which these qualities are achieved to make concrete and convincing the content of the work; they are not an end in themselves, but their quality governs the quality of the work. They are the artists’ business, or rather it is the artist’s business to master them; but they need not necessarily even be apparent. It is the re-stating by each generation of the same truths and perceptions which must be the main purpose of an artist’s endeavour, so that in each generation they are once more accepted, and the fact that this has been done repeatedly is understood and becomes a source of comfort and a means of orientation, a lifebelt in the chaos.

Carefully and slowly I returned to the human figure, discarding fabrication as a process and instead modeling in clay. By this simple move I increased to infinity the vocabulary of form available to me. The earliest figures I made are quite subjective. They still utilise the geometry which was the main part of my abstract sculpture; the difference is that because they have the human figure as their subject, they have gesture and emotion as well. Some people think that the changes in my work show me to be travelling backwards from abstraction to an objective figuration. The implication is that abstract art is ‘advanced’ and figurative art ‘old hat’. I cannot subscribe to this linear view of art history in any case, but in fact at the time I knew that I was making the most radical move that I could possibly make, simply by following my conscience. This was confirmed for me by the fact that immediately my work was deemed by my peers to be completely unacceptable. No dealer would look at it - it was figurative, it was cast in bronze, for goodness’ sake! It just wasn’t groovy. My income took a complete nosedive, my career was in ruins, and for four years I couldn’t sell a thing. My debts shot up, I was in despair. I took the family back to America, where the smell of panic and failure which I seemed to be emitting made people run for cover. They don’t like losers in America - they think that they are infectious. I spent a frightening period in a beach house in Amagansett in the offseason, at that time a deserted and icy cold windswept resort, subsisting on the charity of friends. Eventually I was evicted, together with my wife and children. A year’s Visiting Professorship at the University of New Mexico enabled me to survive (just); then, with a very small amount of cash in hand I returned to Scotland, determined to cast as much bronze sculpture as I could before I was forced to sell up and leave. It was a very difficult part of my life, one in which everything seemed to be disintegrating; but I had brought it on myself I had blasphemed against the canon, and as my daughter said at the time, I had become apostate. I looked up ‘apostate’ in the dictionary so as to be sure that it meant what I thought it did; at the top of the next page my eyes fell upon the word ‘artless’.